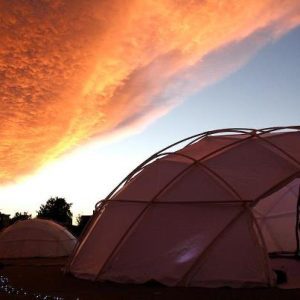 By Alexi Davenport for The Dance Journal

Choreographer and associate professor of dance at the Esther Boyer College of Music & Dance at Temple University, Merián Soto offered a culmination of her seven year work on the Branch Dance Series with the presentation of Somos. Staged in an abandoned parking lot in the North Philadelphia barrio, as part of Taller Puertorriqueño’s free performance series, Café Under the Stars, Soto brought a slice of nature’s tranquility across the seasons to an otherwise harsh urban landscape.

I arrived at the parking lot just in time for the start of the performance after driving through a neighborhood I would not otherwise venture in to. It was also perhaps the coldest night of the Fall season as temperatures dropped towards the low forties. And while I had on a warmer coat, I was perhaps not as prepared as I should have been to brave the elements.

I was immediately struck by the presence of three large geodesic domes that seemed to magically transform the space. At the entrance way, a single dancer, holding a large tree branch with a small light on the end, pointed the way. Another stood mannequin-like before a large lit tropical wall mural with an eerie orange and umber glow.

A greeter offered me a program and explained that there was no set performance per say and that one was free to wander through the spaces and explore. Images of nature were projected throughout the space and on the domes, while sounds of rustling leaves, trickling water and tree frogs engulphed the performance areas. Soto had indeed created a complete sensory experience of nature as her dancers moved throughout the negative space between the domes.

Outside of the largest of the domes, a handful of dancers, including Soto, moved slowly and deliberately with branches delicately balanced upon their bodies that seemed at times to oppose gravity. Gentle shifts of movement emulated similar shifts one might see in nature. The shadows of the dancers against the domes and surrounding wall created another layer of texture and imagery that left me mesmerized.

As the cold winds of the evening picked up a bit, I sought refuge in the large dome, the Summer tent, which had a beach scape projected on it, complete with sun drenched sand and gentle rolling waves. It was the only fully enclosed dome with a single entrance way. Once inside, visitors formed around the perimeter of this heated dome. A mermaid moved methodically in the center of the space as audience members rolled various sized blue spheres in, around and about. The initial pleasing visual this created soon waned, as the movement was dictated more by rolling balls than the artist. While the audience seemed to enjoy the playfulness and ability to interact with in this scene scape, it failed to evoke much else for me.

On the back side of this dome was a large area in the shape of the map of Puerto Rico, marked off by branches and tree stumps. Standing tall with perhaps one of the largest of branches was Jumatatu Poe. I was struck by both the strength as well as the gentleness of both the dancer and branch. The contrast and concept portrayed was humbling. While I desired to sit and enjoy the meditative nature of this display, the cold night had me off seeking the warmth of Spring in the adjacent dome.

Both inside and outside of the Spring dome, the floor was formed by sod that had been laid down. As my feet moved from the hard asphalt to the softness of the grass, accompanied by lush green projections on the walls, I became transfixed with the movement of Jung Woong Kim and Marion Ramírez as they tumbled interconnected with each other and the branches they held. Their performance and intimacy created the enchantment I had waited for, that transported me to a dream like place and a special interconnectedness with nature.

In another open performance space, Olive Prince stood with two massive branches performing a solo.  One could only imagine the balance required under such weight, while moving in space. It was a reminder of just how much nature can dictate our movements as well as how much we need to be conscious of our own bodies as we move through space.

The last dome I approached was actually the closest to the entrance area and the first stop for many of the audience that had taken this journey. With the crowds having moved to other areas, I was able to appreciate better the movements of several dancers with in the space. The placement of these bodies with branches truly evoked recognition of just how much a part of us and our very core resides in nature. The detailed sequencing and subtle interactions between dancers created interconnectedness and its own stream of consciousness. As I sat watching, I was reminded of a quote from John Muir,“when one tugs at a single thing in Nature, one finds it attached to the rest of the world.”

As the evening started to draw to a close, the dancers who were spread out throughout the domes and spaces started to come together, slowly at first, but building in to a frenzy of movement, which created its own rhythm as branches scraped across the asphalt. Swirling with intensity and then transfixed in space, dancer, branches and landscape blended together in a reverie of nature’s wonders.

This most successful and ambitious work included some fifteen dancers in numerous combinations with its core being dancers and co-choreographers Olive Prince, Jumatatu Poe, Marion Ramírez, Beau Hancock, and Jung Woong Kim. Lighting and projections were masterfully designed by Leigh A. Mumford, in such a way that transformed a very large space, added another layer of imagery and shadows, while offering the audience a total immersion of the senses. Costume and set design by Christine Darch offered a minimalistic approach that enhanced the Zen like qualities of the evening. Music composition was by Cicada Brokaw Dennis, that offered a complexity of sounds that shifted and created environments as we moved through he space. And behind the scenes, facing the true challenges of nature in setting up this space on bare grounds was Michael Roberts.

If Soto’s goal was to re-kindle our imaginations, to magically transport us to another place and time, and to re-connect us to nature (even when in a cold, impersonal urban space), then she has more than succeeded on a grand scale. Soto challenged our senses, raised our consciousness, and allowed us to re-define our sense of self and space. For those who experienced it, Somos was transformative and magical.