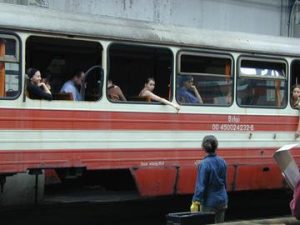 Today, the MAAS building feels warm and inviting—like some place you’d want to hold a cocktail party or, as the case may be, a site-specific performance in the Philadelphia Fringe.  The wooden floor glows golden under the late afternoon sun and some of the audience has to move their seats because the glare is so bright, but it wasn’t always this way and in HOIST, the latest from choreographer Leah Stein, we get a glimpse of what the building used to be.  The dancers, for all their carefully calculated buoyancy, are in fact our docents.

The concert begins with a single movement: Stein stands in the corner of the room, facing the back wall, and raises her arm up towards the ceiling like the hand on a clock.  It’s robotic and mechanical, reminiscent of the days when the MAAS building served as repair shop for the Girard Street Trolley, but then her arms seems to melt as she unfurls and springs up, catching herself on a beam that runs the length of the empty, second story room.

Dancers Jung Woong Kim, Michele Tantoco and David Konyk stomp up the stairs and fling their shoes against a metal grate.  Their repetitive movements seemed distilled from machines and factory workers except unlike those we saw earlier this summer at the opening of the Summer Olympics in London, they’re less literal.  As such, Stein’s nod to industry is more a point of departure instead of a pastiche.

We’re told to pick up our chairs and move to another section of the room.  Stein lies on her side, tucked into the rafters and forgotten as Tantoco walks along the side wall, supported by Kim and Konyk.  The second movement is an illusion of cause and effect, accompanied by cellist Eric Coyne.  The three dancers swing from the rafters, climbing up one another’s leg and swinging like pendulums.

Earlier this week, I wrote that Brian Sanders left no thought un-thought in his use of space for Junk’s contribution to this year’s Live Arts Festival, The Gate Reopened.  By Hoist’s third movement, it is clear that Stein and company left no space unexplored.  They utilize every beam, ever corner, every crevice, even an eight inch spike sticking out from the wall.  One by one, the climb onto a large, L-shaped arm that swings from the brick wall on a hinge.  The arm itself becomes a trolley, dropping its dancer/passengers off at various points across the floor (and the ceiling) then picking them up again.  Its part monkey bar fantasy, part lament: we lose track as to whether the dancers are the workers or the machines.

Hoist reaches its crescendo as all four dancers swing from one of the giant metal beams, purposefully out of sync as they drop to the floor one by one.  Over the course of the hour-long performance, we’ve been given a tour, forced to notice things we’d previously overlooked, and this is the beauty of Stein’s choreography.  It’s not the most vivacious dancing on offer in Philadelphia but its endearing in its well-thought simplicity and Hoist makes the trip to Kensington well worth the effort to see an “empty” building in a new light.