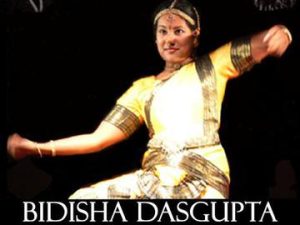 Bidisha Dasgupta’s Einstein/Tagore: Seashore of Endless Worlds was a work both about and comprised of conversations.  Some spoken, some danced, these conversations were inspired by the exchanges between Albert Einstein and Rabindranath Tagore, one of the greatest modern Indian poets and the first Asian to will the Nobel Prize.  The classically-trained Dasgupta performed in contrast to and in collaboration with modern dancers Leslie Elkins and Jodi Obeid, creating a metaphor for the exchange of ideas during the 45-minute concert.

Old City’s Twelve Gates Arts wasn’t the greatest choice in venue— with so little space between audience and performer it was difficult to appreciate, let alone see Dasgupta’s pounding footwork—but the simple space, adorned with a single projection depicting Einstein and Tagore, made for a fitting backdrop.

The evening began with a solo choreographed and performed by Dasgupta entitled Mangalam: Honoring the Elements.  Dressed in green and gold, she walked boldly from heel to toe into the small space and proceeded to demonstrate each of the gestures she was about to perform: waving arms for water, circling index fingers for the planets.  It was Bharatanatyam 101 but a much needed primer considering how little most people know about the 3,000-year old dance form.

She began with her gaze cast sideways, hands touching above her head and her left heel held just above the floor.  Her movements were quick and every time she stamped a new rhythm into the floor, her feet seemed to vibrate; towards the end of the solo, she took hold of her ankle in one hand and extended the other in front of her, gradually stretching into a beautiful attitude.

In between each piece, Elkins (playing Einstein) and Obeid (playing Tagore) read a few lines pertaining to reality, truth and beauty.  The script was based on excerpts from Einstein and Tagore’s actual conversations but the dancers’ lackluster delivery did little to bring them to life.  As they circled Dasgupta with tiny hand held spotlights, probing like a pair of curious anthropologists, I wondered what they were doing their in their orange tunics.  But then they began to dance and it all made sense.

Following a costume change into a bright pink sari, Dasgupta performed two solos in the Rabindra Nritya style, developed by Tagore and also known as “Rabindranth dance.”  Each was slower and more lyrical than the Bharatanatyam pieces; the gestures were more natural and less forced and Dasgupta glided across the entire gallery space.

Unlike the work of British choreographer Shobana Jeyasingh and others, the choreography of Dasgupta, Elkins and Obeid did not seek to blend traditional Indian dance with modern dance; instead the two forms were presented in juxtaposition to one another.  Only in the final piece, Seashore of Endless Worlds, did the two forms begin to mix.  Elkins and Obeid entered the space on the floor and paddled backwards then all three women began to scoop their arms to the side and turn.  They took turns speaking as they danced and by the end of the dance, they—like Tagore and Einstein— came to a meeting of the minds.