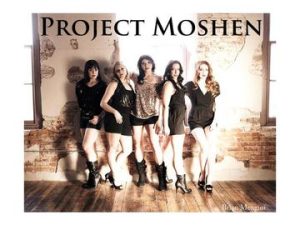 Technically speaking, the final performance of S.O.A.R (Stages of Alternate Reality) by Project Moshen took place in the studio theater at Koresh School of Dance on Sunday night.  But between the blaring pop music that greeted the audience, the unbound energy of the dancers and the excitement of their fans, you’d have sworn you were in a nightclub.

Under the direction of Kelli Moshen, the evening offered a mixed bill of jazz, contemporary and hip hop performed by Moshen and company dancers Samantha Carmichael, Sarah Dziomba, Narissa Fell and Danielle McGilligan, in addition to a dozen guest artists and independent choreographers.  The music, which ranged from Beyonce and Rihanna to Mahalageasca and Kronos Quartet, was fun and the dancers were both feisty and technically proficient.

Moshen’s choreography, however, made me wonder if I was watching an episode of So You Think You Can Dance or the results of Dance Comp 101, which is a shame because the woman can move and clearly possesses the administrative know-how to run a company.

The show opened with a solid yet subtle modern piece choreography by Samantha Carmichael called A Safe Place.  Alchemy Dance Company shook things up with their zany rendition of In the Pocket, choreographed by Amy Harding and performed with both wit and panache by Kaitlyn Clark and Leslie Ann Pike.

Soloist Sarah Masluk of Somantic Movers crawled, tip toed and carved her way through a forest of red and white balloons in Trace but the investigation of space wasn’t, in and of itself, enough to make an interesting piece.  The idea was good—like something from Dr. Seuss book—but it needed to be taken further.

Suburban Housewives, choreographed for Project Moshen by Samuel Reyes, was an effervescent satire on “hairography.”  At least I’m hoping it was a satire because the women, especially McGilligan, were so animated and so precise in their execution of the lightening speed, bootyliscious choreography that they really don’t need to resort to cheap tricks.

The audience loved the SYTYCD-derivative hip hop duo choreographed and performed by Jim Green and Alex Miller but I preferred Tara Madsen-Robbin’s solo, Effort.  Her group piece, Soaring, was obviously the work of a guest choreographer—there were unexpected elements of percussion and well-structured themes and variations—but her solo, throughout which she remained entirely on her knees, was precise and inventive (and probably lost on the majority of the MTV-primed audience).

Moshen’s choreography was perky in Werk! and ambitious in Existence but it took a dive in Behind Closed Doors.  When the dancers entered the stage dressed in retro 50’s frocks and armed with rolling pins and whisks, I thought “Ooh!  This is going to be fun!”  When Rihanna’s S & M began to play, I thought, “Yes!   Neo-burlesque!”  I leaned forward in my seat, expecting a witty statement about female sexuality, or at least a kitschy rendition of the pop queen’s controversial hit (the lyrics of which, for those of you not in the know, center around a chorus of “Cause I may be bad, but I’m perfectly good at it/ Sex in the air, I don’t care, I love the smell of it/ Sticks and stones may break my bones but chains and whips excite me”).

But the kitchen implements were immediately discarded.  And then the lip syncing began.

It was fun, don’t get me wrong, but it read like a gaggle of schoolgirls choreographing a music video at a slumber party (and I’m guessing “schoolgirl” wasn’t what Moshen was aiming for when she decided to produce a show in the Fringe).  Between the costumes and props, I was hoping for a treat like Adam Houghland’s Mashup choreographed for BalletX this past spring but in Behind Closed Doors, Moshen and dancers delivered the joke but not the punch line.

That said, they’re young.  And the audience—myself included— clearly enjoyed the show, which is more than can be said for some “dance” performances.  But Project Moshen needs some seasoning; here’s hoping that next year, we’ll see Behind Closed Doors revisited because these women are most definitely capable of more.