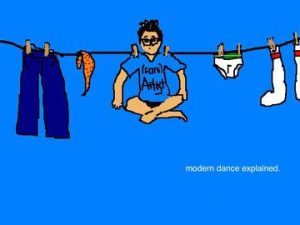 The title alone (modern dance explained) was enough to get me into the Meeting House Theater this past weekend.  The concept (failed 27-year-old barista adopts an English accent and moves to the big city to become Philadelphia’s “next big choreographer”) was enough to put a smile on my face before the program even started.  And the deadpan delivery of Rebekah Rickards, whether languishing beneath her Snuggie in a fit of Gen Y angst or leading her rag tag army of modern dancers through the Electric Slide, was so darn funny that I didn’t even mind when the meandering sketch comedy kept me in my seat an hour longer than I’d anticipated.

(At least not a whole lot.  An intermission would have been nice.)

The story begins with our heroine’s realization that her mother had “three kids and a book club” by her age.  She muses that life would be easier if she was talented, or disabled, or both, and goes on to describe a Rockette with a prosthetic leg.  It’s not exactly PC but by the time Pastel (“like the color genre”) receives the liturgical dance community’s coveted “Amy Grant” in the amount of $137.22 to choreograph a dance for the Christ Sanctified Holy Church’s annual picnic, she’s lampooned just about everything her (and my) generation holds dear: American Idol, Starbucks, So You Think You Can Dance, exercise regimes, artistic expression, the creative process and—most importantly—herself.

For her audition, “Yoga Bitch” (who also happens to teach hip hop and Zumba) performs a “traditional Indian dance” to—wait for it— Jai Ho by the Pussycat Dolls.  Her eyes dart coquettishly from side to side as the music begins and she explains that she got most of her moves from Youtube.  She enlists the help of the janitor (aka “Angry Black Man” played by the talented Ronald Parker) and writhes like Shakira as he bewilderedly pours a bedazzled nettipot over her head.  The misguided Pastel is impressed (“I feel like I was in the city of India!”) and rehearsals soon commence.

It’s the usual touchy-feely fare: trust falls, vocalizations and a game of “Contract and Release” which is definitely not Marco Polo, no matter what the increasingly-infuriated Parker (who just happens to be the best dancer of the group) might think.  After much soul-searching, Pastel finally conceives of a danced based on the Shakers (the nineteenth-century religious sect famous for their furniture and celibacy) and—wait for it again—their “underground” hip hop scene.

The dance pits the House of Salt against the “ethnic and dangerous” House of Pepper.  The dancers, clad in hipster-meets-Shaker-garb, duke it out and end with a “Battle of the Brooms,” performed to (you guessed) it Push It by Salt-N-Pepa.  Possibly this was a “you had to be there” moment but trust me: it was one of the most hysterical finales I’ve seen all year.

Unfortunately the show continued.  Pastel is ousted and loses the coveted “Amy Grant.”  She falls into another Snuggie-filled depression and dreams of meeting her “Fairy God Bee” (Parker, dressed in yellow and black tulle and fluorescent feathers).  “Killa Bee” and “Vanilla Bee” vogue it out but Parker upstages Rickards and the final scene is bizarre and honestly, a bit anticlimactic.

Nonetheless, both of the Rickards siblings have a gift for comedy.  And Cortes was hysterical as the “Shy Puerto Rican.”  Between Pastel’s “long, artistic scarf” and the subtle jabs at modern dance culture, I can’t remember the last time I laughed so hard (actually, it was the night before at Ballroom Ain’t for Sissies).  The young cast and crew did a fantastic job of incorporating multimedia into the work and it’s a true shame that Modern Dance Explained ran for one performance only.  Please come back, Rebekah.