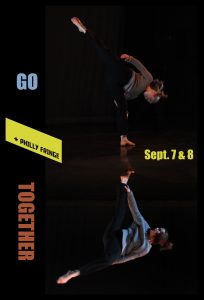 Collaboration is the name of the game in Go Together.

Ellie Goudie-Averill and Pamela Vail combine forces not only with each other, but also with a variety of other artists to produce a concert of wide-ranging and compelling premiers.   Powerful bodies, sound, text and film map the peculiar, the particular, the personal and the universal. Go Together will appear at The Community Education Center’s Meeting House Theater on Friday, September 7th at 6pm and Saturday, September 8th at 4pm & 8pm. Admission is $15. For advance tickets, contact the Fringe box office at (215) 413-1318 or visit www.livearts-fringe.org.

Goudie-Averill and Vail will perform Mechanism, a movement-driven collaborative duet with original music by NYC-based composer Brandon Evans, in which both movement and bodies are explored as systems. Together we find humanity within machinery as we see each other through the separate mechanisms of our moving bodies.

Ellie Goudie-Averill will present the large and energetic I think I no you from some knowhere, a dance that explores American nostalgia for the recent past through raucous interactions and ensemble work by ten dancers.  The piece is accompanied by Bonham, atribute to the famed Led Zeppelin drummer, played by Temple University’s percussion ensemble under the direction of Phillip O’Banion.  O’Banion and Nate Buonviri, the drumming duo a2, will play David Hollinden’s Surface Tension live for the two dynamic companion duets that occur within the group dance.  The duets feature dancing by Beau Hancock with Jae Hoon Lim and Katherine Kiefer Stark with Lauren Putty.  Goudie-Averill will also perform her new solo based on Philadelphia poet CA Conrad’s (Soma)tic Poetry Exercises.

Pamela Vail will present works encompassing a range of tones and perspectives, each prioritizing the investigation and potential of the moving body as communicator.  Rich, complex physicality of both the body and the spoken word offer resonant metaphors and layers of meaning in a solo performed by Vail and created collaboratively with Peter Schmitz (NYC), with original music by Michael Chorney (Vermont). Vail will also premiere a duet performed and created with movement-theatre artist Jon Foley Sherman (PA) that explores the textures and tests of moving under different series of obligation.

Interspersed with live work will be two short, distinct dance films by Jeremy Moss (PA) that feature Vail’s choreography and performance. Chroma is wild ride that focuses, via manic perspective shifts, on the driving movement of a solo figure (Vail) against a backdrop of rapidly changing colors; the edits “dance” as much as Vail does in this electrifying film. In stark contrast, the austere and meditative Constructs reveals the meeting, and parting, of two figures on a train track on a cold winter’s day.

Ellie Goudie-Averill, a 2007 MFA Dance Performance graduate of the University of Iowa, co-directs the Stone Depot Dance Lab and currently teaches Modern Dance technique at Temple University and Ballet at the Wissahickon Dance Academy in Philadelphia. Her choreography has been shown in Philly, New York City and throughout the Midwest in a variety of venues.  Currently, Ellie dances for MacArthur Dance Project and Group Motion Dance Company and has performed with many other choreographers and companies such as SCRAP Performance Group, Movement Brigade, Kayle & Company and Daara Dance.   She began her training at Ballet Midwest in Topeka, Kansas, holds a BFA in dance from the University of Kansas and has also served as Visiting Professor of Ballet at Bucknell University and Artistic Director of the UI Youth Ballet.

Pamela Vail is a performer, choreographer, improviser, and teacher.  She is a founding member of critically acclaimed New York City-based Yanira Castro | a canary torsi, and is a co-founding member of the Architects, a performance improvisation ensemble.  Vail also works with independent choreographers including Terry Creach, Heidi Henderson/elephant JANE dance, Tori Lawrence and Peter Schmitz.  She teaches master classes and performs her own choreography nationally and internationally, and is currently Assistant Professor of Dance at Franklin & Marshall College in Lancaster, Pa. Vail holds a B.A. from Middlebury College and an M.F.A. in dance from Smith College, and has been dancing since she was six years old.

PrevPreviousS.O.A.R_ing in to Fringe
NextTake Our 2012 Dance at Live Arts & Philly Fringe Poll – Tell us what you plan to seeNext