This genre‐bending dance explores our complex relationship to time and furthers NCDC’s ongoing interest in pulling dance out of the theater (TAKES, 2010; Wandering Alice, 2008).

Return Return Departure follows the dancers as they travel from the gallery and into the enclosed garden across from the American Philosophical Society Museum on Fifth St. just south of Chestnut. Musical composition by long‐time NCDC collaborator Michael Kiley fills the garden as the sun sets and the dancers and audience join together in completing the cycle of the performance each night.

Both dancers, Nichole Canuso and John Luna, each wield a video camera and film their individual experiences from inside the dance, resulting in two distinct versions of the event. After each live performance the resulting videos are posted in the gallery, side by side, accumulating with each new performance. The evolving videos reflect changes in the weather (wind, rain, budding trees and falling leaves) and record glimpses of the audiences, while representing the dancer’s energetic shifts as they embody the passing of time. The audience will witness the live unfolding of the dance as well as the resulting films displayed in the gallery.

“Meeting Antonia, first through her work and then in person, was like meeting a kindred spirit,” says Artistic Director Nichole Canuso about creating this piece. “I am inspired and fascinated by her view of the world as reflected in her work and look forward to responding and interacting with her current exhibit. I am so grateful to Sue Ann for bringing us together on this project.”

“Having seen Takes I was thrilled when Nichole agreed to choreograph a work for the APS Museum that would continue her work combining dance and video,” says Founding Director and Curator of the APS Museum Sue Ann Prince.

“Canuso’s and Luna’s every‐changing performance and simultaneous filming over a period of months explicitly marks time’s passage and provides a brilliant and dynamic counterpoint to the quiet, but powerful meditation on time evoked in Contro’s exhibition.”

The performances start during the Live Arts/Fringe Festival with a few additional performances occurring in the fall and winter. 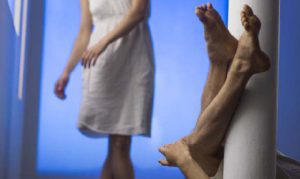 The Exhibition: Tempus Fugit
Award‐winning Chicago artist Antonia Contro has selected books, manuscripts, and curiosities from the APS collections and juxtaposed them with her own contemporary art, including drawings, paintings, videos and a sound installation. Contro’s artful display explores how we try to capture, measure, and find meaning in the midst of time’s inevitable passage.

About Nichole Canuso Dance Company (NCDC)
NCDC creates virtuosic and engaging dance‐based works that explore the complexity of human experience. Choreographer Nichole Cansuo blends full‐bodied dance technique and idiosyncratic gesture to make dance that examines the role of the audience, providing windows for the viewer to engage intimately and directly with the work. Recent Live Arts/Fringe productions include TAKES (2010) and Wandering Alice (2008).

About the APS Museum
The American Philosophical Society (APS) Museum, located next door to Independence Hall in Philadelphia’s historic district, hosts exhibitions that explore history, art, and science in creative and thought‐provoking ways. In conjunction with each exhibition, the museum commissions innovative works by visual artists, musicians, poets, performers, dancers, and others. These original works interpret the themes and objects on view, linking them to relevant issues today.

Nichole Canuso, Choreography
Nichole is the artistic director of Nichole Canuso Dance Company. She was a company member of Headlong Dance Theater from 1997‐2011 and has performed and collaborated with Theater Exile, Karen Bamonte Dance Works, Group Motion Dance Company, and Pig Iron Theater Company with whom she co‐created and toured a three‐woman clown play. In 2008 Canuso performed with Bill Irwin in The Happiness Lecture at the Philadelphia Theater Company. Nichole’s dancing, choreography and study have taken her to France, Scotland, Poland, Japan, and across the United States. Her work has been supported by The National Endowment for the Arts, The Knight Foundation, a Bessie Shoenberg First Light Commission, The Leeway Foundation, the Independence Foundation, Dance Advance (a grant program funded by the Pew Charitable Trusts and administered by the University of the Arts), The Pennsylvania Council on the Arts, Philadelphia Cultural Fund, and Ellen Foreman Memorial Award. Choreographic residencies include fellowship at Maggie Allesse National Center for Choreography (FL), Millay Colony for the Arts (NY), The New Edge Residency (CEC, Philadelphia), The Swarthmore Project (Swarthmore College, PA), The Choreographers Project (Susan Hess Dance Studio, Philadelphia), and the Indiana University of Pennsylvania. Her work has been produced several times by the Philadelphia Live Arts Festival and Philly Fringe. Her most recent work, As the Eyes of the Seahorse was co‐produced with the HERE Arts Center (NYC) in December 2010.

Michael Kiley, Sound Design
Michael Kiley is a singer/songwriter/composer and founder of the free music project The Mural and The Mint. Michael has worked as sound designer/composer for theatre and dance companies including Theatre Exile, Brat Productions, Nichole Canuso Dance Company, 1812 Productions, Subcircle, Rowan University, Temple University, and David Brick of Headlong Dance Theatre. This fall, he is composing original music for Fighting For Democracy at The National Constitution Center as well as All My Sons at Delaware Theater Company. The Mural and The Mint is a free music project working in hybrid, interdisciplinary performances that defy expectations of what a music performance can be. In December 2010, The Mural and The Mint premiered the evening length work, As the Eyes of the Seahorse at HERE Arts Center in NYC. Mike graduated with honors in 1999 from New Mexico State University with a BA in Theatre and Music where he studied sound design, acting, vocal pedagogy, and vocal performance. His newest collaboration with Nichole Canuso Dance Company, TAKES premiered in September at the Philadelphia Live Arts and Philly Fringe Festival and will be performed in NYC at 3LD in January 2012.

Tara Webb, Costume Design
Tara Webb is especially interested in sustainability in costumes and the nodes where technology and fashion intersect. Costume designs in New York include: Chimera, with Deborah Stein and Suli Holum , Cynthia Hopkins’ internationally toured productions of Accidental Nostalgia, Must Don’t Whip ‘Em, and Failure of Success, Liz Sargent’s Work‐in‐Progress at Chez Bushwick, A Gentleman Caller for Clubbed Thumb at the Ohio Theatre, Koosilja Hwang in Deadman Dancing and mech(a)OUTPUT, Young Jean Lee’s The Appeal at Soho Rep, Theatre of the Two‐Head Calf’s Major Barbara at LaMama, John Jesarun’s staging of the Harry Parch opera Delusion of the Fury at the Japan Society as well as many other individual commissions including works for visual artists Angie Eng and Michael Anderson. She worked with the Wooster Group from 1998 to 2004 with both costume and video on the Wooster Group’s productions of House/Lights, North Atlantic, Hairy Ape, To You The Birdie! and the restaging of Brace Up! (2003). She also collaborated with the Collapsable Giraffe from 1999 to 2007 as a performer, costumer, and video artist and has also worked with the National Theatre of Scotland, TR Warzawa, Mabou Mines, and the West Bay Opera Company. Other designs include custom wedding dresses, various
commissions, custom soft goods and interior designs for many restaurants and businesses, as well as video design for Stanley (2006) with Lisa D’Amour and several video/set installations for theatre at Swarthmore College for the 2009‐2010 school year. She is currently the Costume Shop Supervisor & Arts Publicity Assistant for Swarthmore College. She also teaches Costume Design at Philadelphia University.