Quince Production’s GayFest is in its second year with a spectrum of GLBTQ Theater staged at their new home, Plays and Players on Delancey St.  Artistic director Rich Rubin started the month long festival off with a Bang, as in The Bang Group. They are the irreverent dance troupe co-directed by David Parker and Jeffrey Kazin, who have been dance partners onstage and off for 22 years.

‘Misters and Sisters’ is their swellegant dance cabaret about their life together and their particular passion- movie musicals. They have been touring it with dancers Nic Petry and Amber Sloan all summer and chose Philly as their last stop to kick up their heels before they kick off their heels back to New York, their home base.

In the show’s opening number, Petry and Sloan dance a quickstep waltz, ala Astaire and Rogers, and not without some ballroom parody. Parker and Kazin are seated behind them in hoodies watching with dreamy looks in their eyes, but soon they peal away the sweats to reveal their knockoff black sequined ensems- Kazin in a cool sleek pant cutaway and Parker in scary sequined mother- in- law drag.  Kazin is soon aloft and pique-ing in point shoes, quoting from Swan Lake, while Parker is circling and otherwise tap dancing amok. Parker tells the audience that between them they have represented every relationship but one and they launch into Irving Berlin‘s chestnut “Sisters” and whip out their red feather fans, and are soon joined by Petry and Sloan for some miniature Busby Berkeley fan blooms.

Later, Sloan has a dramatic solo, packed with lunging turns and extensions that looked overwrought up close, but, impressively Sloan ends with a gorgeous penche arabesque. The three men, with Petry in a red vest and shorts, dance the “All I Do” Charleston number from ‘Singin’ in the Rain’ down to the cheesecake  camp and vamp, then they get do it again just whistling the music tune and dancing it in slow motion. This sequence turned out to be even more fun, not to mention being a rather witty deconstruction. In contrast, their dream ballet ala 40s musical gets claustrophobic with scrambled turns and scuttled pacing. 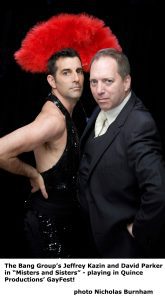 But Kazin and Parker floated personal  Hollywood music magic with their dance to “Somewhere over the Rainbow” sung not by Judy, but by a young Jane Powell. This becomes a charming manifesto of coming out and falling in love.  They also sing a sweet medley of ‘Baby, It’s Cold Outside’ and ‘Tea for Two’ but all the singing and dancing in the small theater results in some heavy breathing, and some blurry dancing.

But, some sweaty moments didn’t put a damper on the cabaret fun of this show. The best number for last a tap and song duet about marriage equality. They tap their vows in some very fleet tap patterns (Parker has a lot of sparks in those taps) and sing  fine harmony, Parker with a rich baritone and Kazin a notch above.