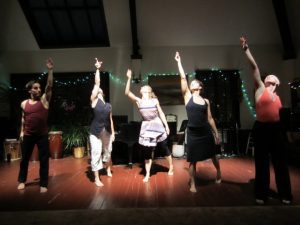 “We had strong interest in American modern dance and also in the culture from Miles Davis to Andy Warhol and Alvin Ailey. So we came here in 1968 and the rest is history.” The eternally youthful Manfred Fischbeck told the audience at the anniversary celebration of Group Motion hosted by composer Andrea Clearfield in a special Salon at her loft in Center City last week. The ethereal environs was the perfect setting for a company victory lap, with performances of music, poetry and very game GM dancers Marie Brown, David Konyk, Lesya Popil, Hedy Wyland and Lindsay Browning.

In his introductory remarks, Fischbeck provided a little company history. “We started in Berlin in 1962 and we’ve had 44 years of American existence, the three of us came over here in ‘68… to check out the situation. Someone who had worked with us in Berlin, had a sense that our work would go over well here, so we took a chance.”  Fischbeck, then and now, with co-founders Brigitta Hermann and Helmut Gottschild, were not just pioneering in the dance world, but as part of a new artistic and cultural landscape in Philly.

“It’s great to see such a beautiful mix of friends and people who have been involved with Group Motion these 44 years.” Fischbeck said.  As company director, choreographer and composer, Fischbeck is as hands on as ever as he spoke to “Vital importance to have your support for the coming years.”

Loretta Witt, attending Salon for the first time, was catching up with Group Motion and reminisced that she actually presented the troupe at Chestnut Hill College  in 1969 as part of an arts festival that she organized while still a student.

Witt said she doesn’t remember how they hooked, but that they “were so thrilled, it was one of their first performances in the US. I was a senior, organized this festival, we had everything from Louis Cahn, speaking about architecture to drama and all of the arts schools in the area involved, the blues singer Buddy Guy. Really great stuff, but I remember Group Motion was the highlight of the festival.”

Fischbeck recalled those earliest years as artistic émigrés in his opening comments “The performance in 1968, our first year, we had a performance at Judson Church in New York, at that time it was the most important place for contemporary dance. We crunched in there and we got noticed, with strong response from the important critics. From there we felt encouraged, and decided to make Philadelphia our home. Which was a good choice because New York was crowded.”

In capping off the evening Fischbeck presented Augurs based on what 44 could represent from the Numerology dictionary and the dancers picked the words at random. To music by Steve Reich, they expressed the given word and repeated each gesture, accumulating a choreographic phrase that broke into improv variations. Fischbeck, standing to the side, seemed delighted with the results, as was the audience.  He read out the words afterward- inspiring, honor, expressive, joyous, adversity and faith- all numerogically connected to 44. The mysticism wasn’t lost on this loyal audience. It also was a fine representation, robustly conjured, of Fischbeck’s imprimatur of liberated dancer centric movement.

What is a Salon without liberated literati, Fischbeck, accompanied by Clearfield on piano, read a poetry cycle titled The Rim of Love (Cliff-Canyon-Edge-Rim) inspired by a stay in Arizona, full of atmospherics and raw emotion, dramatic evocations, some of which seemed to evoke his sensibilities.

“Dance in the mirror of clouds.”

“Music always, but I started with literature, Fischbeck said later, “writing, theater and then dance.”

In an interview after the event Fischbeck talked about his upcoming programs and even though there is always the fiscal realities to contend with he was energized about the company receiving a Pew Grant this year. 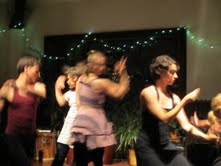 “We are very lucky to have gotten a Pew Grant and that will be a substantial focus in the next two years. We have always created own repertoire and we have also collaborated with international guest artists. I’m very proud of that track…of Group Motion having provided input into the larger cultural community.”

“We are doing another collaboration, working with Susan Rethorst, from New York. She also works in the Amsterdam and is on the international scene. She had a retrospective last year at Danspace in New York. A second generation Judson Church artist from downtown. She’s so in focus….in contemporary work. Bryn Mawr College is presenting a retrospective, she actually is moving to Philadelphia and our work will start in July.  Her process in ours have similarities, and in many ways we are distinctly different, so the results will be interesting.”

Touring at this point in question. We’re working on some touring… which may be …” he says he’d rather not jinx it. Earlier this spring enjoyed successful tour dates at Chicago University “it was wonderful. Rockefeller Temple we played with a wonderful orchestra, with Andrea’s music, based on Tibetan classicism.” he said.

Upcoming touring is a question for the immediate future, “We’re working on some touring… which may be …” he says he’d rather not jinx it. “We continue with our Spiel Uhr (Play Clock) series at CEC, we will have a home season next spring.” he added.

As part of Spiel Uhr series, Fischbeck is working on new music “an improvisational piece with the company, which I developed in a solo recently at Christ Church, I’ll be doing it again in the fall- it has a musical aspect with an ultrasonic beam, that is hooked up with a keyboard and when I move inside that beam, I generate music. It’s an invisible cone of ultrasonic sound waves extending 25 feet and I program this beam on the keyboard in pitches, scales and textures so I’m moving in and out of the beam and my movement is generating the music.” 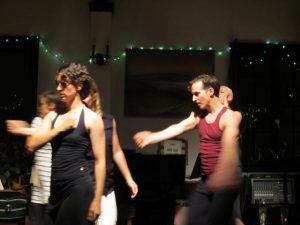