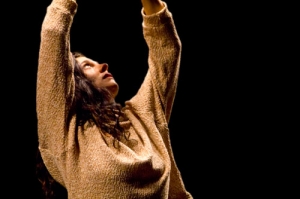 by Kat Richter, MA for The Dance Journal

As the audience waits in anticipation, seated in a circle onstage, the front doors of the Jeanne Ruddy Performance Garage creak open, one by one, to reveal dancer Nicole Bindler standing on the sidewalk.  It’s a bizarre start to the evening’s program, Saudade, which includes two works by Bindler’s company and another by PIMA Group, but it sets the tone for an equally bizarre evening in which the very meaning of “dance” gets stretched to and perhaps beyond its limits.

Bindler’s solo, I Think Not, was choreographed by Deborah Hay of the well known Judson Dance Theater.  Bindler learned the solo in Scotland as one of 20 participants in Hay’s Solo Performance Commissioning Project.  There’s no music and very little movement.  Instead, Bindler lies on the floor, runs around the audience, studies her feet like a baby discovering them for the first times and crawls across a number of audience members who don’t quite know whether to laugh or remain silent.  She turns out her feet and pads across the floor, one foot in front and then behind as if to leave the imprint of a braid behind her.  Eventually Bindler begins to speak but aside from a few names spoken into her palm, the words are incomprehensible.  The work concludes with Bindler mumbling to herself as she ambles up a flight of stairs in the back of the garage; I can’t help but wish the program notes had shed some greater light onto what’s just happened.

Bindler’s Pia Mater shakes things up a bit.  Now, there is no silence.  There are 17 dancers and four musicians, all dressed for a party.  The work, which premiered in 2007, begins with a duet in which two dancers circle each other slowly then raise their arms.  They run circles around the stage and grapple like a pair of worn out sumo wrestlers.  The rest of the dancers enter the stage one by one, performing a series of lunges and gestures in a Z-shaped pattern; once all are assembled, they stick out their tongues, flap their arms like wings and run around the stage.

Pia Mater is supposed to be about Bindler’s “profound social anxiety” which left her mute in the 7th grade but there’s so much going on—party dresses, high heels coming on and off, champagne, inebriation, balloons popping and a drummer scraping a pot lit against the rim of his instrument—that it’s difficult to get to the underlying meaning of the piece.  Indeed, much of the audience drifts away after the first act, and so do many of the dancers.

This is unfortunate, because it’s in the second act that PIMA Group takes center stage.  Dancer Melisa Putz performs a solo entitled Broken Wings to accompaniment by Thomas Clark, Shane Leddy and Morgan Pinkstone.  The stage is set with two projection screens; one depicts Putz in the woods, performing the same fractured movements that she’s performing onstage, while the other features a series of captions that tell the story of a bird who cannot fly.  The result is a silent-film-meets-horror-story.  Bindler and dancers took risks and performed with integrity but it was Putz who resurrected an otherwise bewildering evening.

Kat Richter is a freelance writer and teaching artist who holds an MA in Dance Anthropology.  Her work can be found at www.katrichter.com.