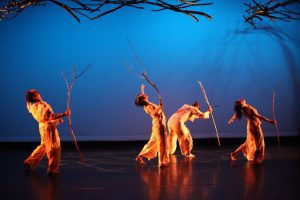 by Steven Weisz for The Dance Journal.
Photos by Bill Hebert.

Following the cycle of life, death and renewal, that this revisited work embodies, Kun-Yang Lin/Dancers presented Beyond the Bones Revisited 2002/2012 this past weekend at The Painted Bride.

Kun-Yang Lin was one of the countless individuals, who were in New York City when the planes struck the World Trade Center on 9-11. While griped with shock, grief and fear, he also was witness to the aftermath that followed, in which people sought “to connect, to be enlarged and to go beyond”. He watched as grief and anger were replaced with “love and an emerging sense of resilience”. It was not long after that Kun-Yang’s father died suddenly and unexpectedly. With the gamut of emotions that followed, he began to reflect on the meaning of his life as a dancer, an artist and a teacher. In working through this process, Beyond the Bones was conceived. 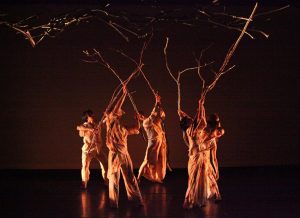 Upon entering the theater at the Painted Bride, one noticed bundles of branches strung throughout the ceiling, with an even larger bundle placed downstage right with a glass bowl that contained water. As the lights dim, we are presented with five dancers on stage and one in the center aisle, each holding a single branch with slow, deliberate and meditative movement. The music combined with Tai Chi like movement created stillness and a sense of reflection as this journey began to unfold. 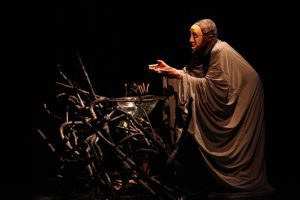 In this exploration of life, “while simultaneously embracing the mystery of death”, guest artist Rhonda Moore appeared in Indonesian mask to usher in the approach of old age. The other dancers, with their tree limbs in hand, made a futile effort to fend off that which we will all inevitably face.  Rhonda Moore was more than brilliant in her role, clearly influenced by the training and coaching of mask and object artist, master Huahua Zhang.  With the use of just minute movements of hands, arms or even just knees draped by her costume, her entire core appeared altered and drew us further in to her aging character.

In this revisited work,  Executive Director, Ken Metzner explains “this group of dancers, some of whom have worked with Kun-Yang since 2005 or 2006 (and Jen Rose even earlier as his student at Temple) did not have a direct experience of 9-11, as had the original group of dancers, all of whom were in NYC that day. So the question became how to allow the newer dancers to embody that experience and how the newer ensemble could coalesce around the complex confluence of mixed feelings and urges that came out of that day including fear, grief, anxiety, and yet emergent hope, resilience and community.” 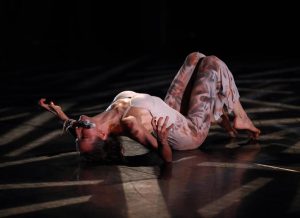 This strong sense of collaboration and ability to truly capture those feelings was clearly expressed in a solo, Shades of Death, presented by Jennifer Rose. Tension, anguish and even anger in her meticulous movements were accentuated by gut wrenching facial expressions, while clutching a bone in her mouth. Jennifer took us through a pivotal view of death and dying, while literally in the grips of the underworld.

Moore, the embodiment of death, in hooded cloak reappears, as remaining dancers shout, fall and skirmish to a steady beat, representing time, created by a musical mix of Tibetan bells, Bulgarian folk song and random sounds. There is constant conflict and chaos, tension and release. Eventually, a single dancer is lifted higher and higher, falling backward with a solitary soul piercing scream in to the arms of her fellow dancers.

As the evening progressed, I could not help but notice the audience around me and how much they were drawn to the experience.  Kun-Yang created visuals and imagery that were beautiful, stunning and evocative.  Image after image were created in ways I had not experienced before, enhanced by the installations of Alison Stigora, the lighting of Stephen Petrilli, and the costumes of Heidi Barr. 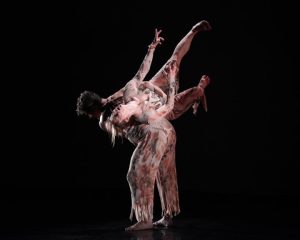 Next, we are presented with The Crying Seekers, a duet performed by Jessica Warchal-King and Eiren Shuman. Both dancers moved and interacted effortlessly, with their eyes closed the entire time, ultimately portraying vulnerability, survival and self-reliance, while challenged with our very understanding of the end of life. 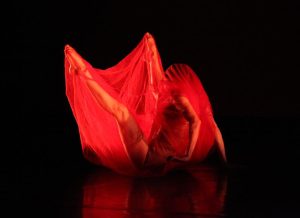 At just the perfect moment, Olive Prince appeared amongst all this darkness and turmoil in a womb of red chiffon. She was a mother in labor, with new life emerging, as we experienced the process of re-birth in this never ending cycle. Prince reminded us to examine what it means to be alive, to be connected. 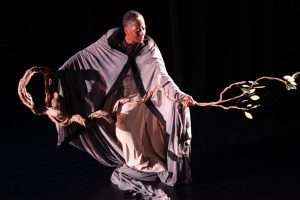 Moore returned, standing before the pile of branches and pool of water on stage, shedding her death mask, dipping in the pool, and ultimately being re-born. With a supple young branch, she started her cycle of life anew with a dance. She is then followed by the other dancers, Seekers of Wonder, as they each dip in to the same pool of life, reflect, breathe and form new connections.

In speaking with Kun-Yang after the show, he viewed the branches as representing the human body, “bones, while strong are destructible like wood”. He also spoke of the parallels of September 11th and the one tree that survived through it all.  He saw many parallels between the imagery he had created and what now stands as a memorial in NYC.

The evening concluded with a chorus of singers moving through the audience with Kun-Yang himself amongst them. They join hands with the dancers on stage in a circle of life. Simple folk dance like steps and harmony, focused on the positive and a connectedness that even had the audience, while still seated, feeling very much a communal part of.

Beyond the Bones has vastly changed since its inception in 2002. In a sense, it has also been re-born, with new dancers, a different time and a new perspective. The new outlook is perhaps a bit more distant and reflective, than when in the throes of the turmoil of 9-11.  Yet as humans, as Kun-Yang explains, “we still face many of the same issues, constant conflicts and chaos”.  Our need to connect and transcend is still ever present. What Kun-Yang does so well as a choreographer, artist and individual, is allow us through his artistry to view this need,  making Beyond the Bones not only so moving spiritually but timeless as well.