I am a recent transplant from the Chicago arts scene to what is now my new home in Philadelphia.  Just as this city has many different neighborhoods, each with their own distinctive style and nuances, I have found the Philadelphia dance community to be quite similar. It is sometimes a shame, that some of these smaller dance groups do not always get the attention, collegial support or financial backing that they so richly deserve. Yet they seem to persevere and even thrive!

I was pleasantly surprised when I recently attended the Alchemy Dance Performance Fundraiser held at the Performance Garage. Not only was the show sold out, but its producers found themselves scrounging for extra chairs to accommodate additional guests, who lined up at the doors. 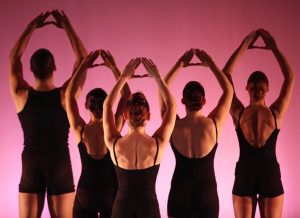 Alchemy Dance Company under the direction of Amy Harding is a relatively new company, which bills its style as being a blend of modern, ballet and jazz techniques.  They presented a total of six pieces for the evening interspersed with performances by several other dance companies and choreographers to fill out the bill.  Alchemy’s repertoire consisted of three repertory works from the past and three recently created pieces.  On solid choreographic footing and execution were Elemental Energies and Rite, both of which I had actually seen performed before as part of the PIFA festival in 2011 in Philadelphia. A wonderfully rich and imaginative score for these pieces was created by Jonathan Bowles.  Amy’s choreography always seems to take on a moving and mythological quality, which is both subtle and intense as the audience is drawn in to her vision.  A Blessing and A Curse was a hard hitting duet to Nine Inch Nails, executed with flawless syncopation by Kaitlyn Clark and Leslie Ann Pike. 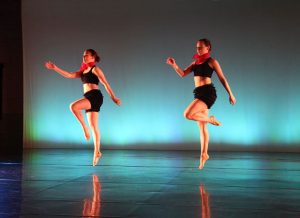 Amongst the newer works presented, Romp and Circumstances was perhaps the largest crowd pleaser as two flirtatious, Parisian, young ladies turn the tables on their male counterpart with several blows including one to the groin, to only then empty his pockets and perhaps a bit of his dignity as well.  Alchemy rounded out their part of the program with Chasing the Moon, which showed great potential, but felt a bit unfinished, leaving us wanting just a bit more. Perhaps this was a good way to end the evening.

One of the surprise gems of the evening was Lauren Putty White’s Hello? Her piece offered a soulful, jazzy and beautifully executed solo with live accompaniment on drums and trumpet. She was then joined by dancers LaMia Dingle and Brittany Loos as the music changed gears and tempo to offer us an edgy, intense and continually shifting variety of  movement. Putty herself has performed with Philadanco, Urban Bush Women, BalletX and even Parsons. Her stage presence, beautiful lines, expressiveness and interpretation of movement was a joy to watch.

Also, worthy of mention were two pieces by MM2 Modern Dance, whom I had not seen before. Cookie Cutter, choreographed by Heather Fleischman was a well formed solid piece that examined the similarities and differences between members of a family. The movement created offered distinct textures, enhanced by staccato like movement that added an idiosyncratic feel to the whole piece. The Continuing Effects, choreographed by Jenna Faye Eugenides posed a stark contrast with a deeply emotional piece that offered beautiful and haunting imagery,  that seemed to impact both the dancers and audience alike.

Choreographer, Jessica Warchal-King presented a solo entitled, Trenches, danced by Casandra Cotta. I have seen Jessica dance before with Kun-Yang Lin/Dancers and have known her reputation as the producer of the InHale Performance series, but was unfamiliar with her work as a choreographer.  From post-performance conversations with others, I gather that Trenches has been a piece in continual progress that has moved from being a duet to a solo. I am not sure I completely followed the course of the piece but the movement created was extremely rich in vocabulary and equally pleasing in its flow and execution.

Alchemy is still very much an emerging company but they are doing big things with the resources they have available. If the audience reaction to this program is any indication, you will be seeing a whole lot more of them in the future.