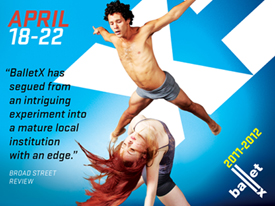 BalletX offers the second installment in its 2011-2012 Season, an array of three intriguing works by nationally and internationally recognized choreographers, Jodie Gates, Edwaard Liang, and Matthew Neenan. In Spring Series 2012, BalletX will explore a diverse repertoire of music and dance with choreography set to the music of J.S. Bach and American indie-rock band Beirut.  Performances will be held at the Wilma Theater, April 18 – 22, 2012.

BalletX Co-Artistic Director Christine Cox remarks, “This is going to be a very special program because the ballets we are bringing back are ones that resonated in my heart years after seeing them.  Plus we are thrilled to have Jodie come back and create a premiere for us, this will be her second piece for the company.”

The first piece in Spring Series 2012 is a World Premiere by former Joffrey and Pennsylvania Ballet Principal Dancer Jodie Gates who returns to BalletX following her 2009 debut Le Baiser Inevitable (The Inevitable Kiss).  Gates boasts an outstanding body of work, has choreographed for Berlin’s Staatsballett and Cedar Lake Contemporary Ballet in New York City, and is a recipient of an Altria Fellowship.

Choreographer, Jodie Gates discusses her upcoming world premiere, “I am thrilled to be invited to create for BalletX once again; this company is truly one of the best contemporary dance companies in the nation and there is nothing more invigorating then to collaborate with incredible dancers on a new creation. My hope with this new work is to display the individual vulnerability and athletic precision of the entire cast of dancers.  There will be a sense of intimacy built into the piece that will be different than any other work I have done prior.”

The series will continue with Largo by internationally recognized choreographer Edwaard Liang which had its BalletX premiere in 2009. The piece is set to the music of J.S. Bach’s Goldberg Variations and inspired by the decorative tableaux Progress of Love by French painter Jean-Honore Fragonard.  Liang’s choreography has been featured on the Kirov Ballet, San Francisco Ballet, and New York City Ballet, among others.

BalletX will also present The Last Glass by Matthew Neenan, which received critical acclaim during its 2010 premiere. The Last Glass is a striking and whimsical ballet set to the music of American indie rock band Beirut. Cox says “This athletic, evocative ballet was an instant favorite of our audiences and we sold out performances during the summer 2010 premiere.” Neenan has received numerous awards and public recognition for his choreography from the National Endowment of the Arts, The Pew Center for Arts & Heritage through Dance Advance, The Pennsylvania Council on the Arts, The Choo San Goh Foundation and The Jerome Robbins NEW Program Fellowship, among others.

BalletX is pleased to announce that surprise pop-up performances by local artists will be featured during BalletX’s Spring Series 2012, thanks to the popular eXpand the eXperience program funded by the Knight Foundation.

In addition, BalletX will host on-stage audience conversations with the artistic staff, choreographers, and company dancers, which will provide patrons with the unique opportunity to engage directly in dialogue with the artists.

About BalletX
Founded in 2005, BalletX is an innovative and adventurous company that produces sophisticated and striking choreography reflective of a vision to integrate athleticism, emotion, and intimacy.  Recognizing the synergistic power of artistic collaboration, BalletX taps into the creativity and passion of a diverse pool of U.S. and international choreographers who produce work that is both surprising and compelling.