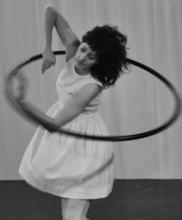 For SCUBA, The Velocity Dance Center in Seattle, ODC Theater in San Francisco, Philadelphia Dance Projects and Independent Curator, Lauren Van Wieren in Minneapolis partner together to bring the freshest names in contemporary dance to new audiences. SCUBA provides precious touring opportunities for local dance artists, and for everyone else it gives a fantastic view of the breadth of choreographic invention across the country.  www.scubadance.us

Dance Magazine has called Holly Johnston “a fearless and fluid dancer.”  She will perform with her ensemble Ledges & Bones, excerpts from her latest choreographic project, Want. Dancers shift through a visual landscape as they explore the exhilarating, maddening, and often mysterious terrain of relationships and our instinct for self-gratification. Want, is Johnston’s first project to make visual design an equal partner in the creative process. The graphic content [of Want] is as kinetic as the dancers. Collaborating with visual artists Taso Papadakis, Kyle Ruebsamen, and Michael Fullman, Holly Johnston has created a performance piece that graphically animates the theater with Projection Mapping Technology.  “It sounds sophisticated – and it is – but at bottom, it’s a form of interactive video projection,” explains Johnston.  “The video is programmed to follow and respond to the dancers.”

As an “emerging” dance artist on the Philly scene Gabrielle Revlock has demonstrated a highly individual style of movement composition around content that resonates with her peer generation. In recent collaborations she and co-creators seem to be pushing the boundaries of what can be quirky and mad-cap, but her own choreographic work, though tinged with humor, explores a kind of solitariness and isolation – whether it’s a deep concentration with a hoop or personal interactions within a group.  She has an engaging dramatic presence, enlarged with clever and pleasing movement sequences. Revlock will perform a re-worked hula solo “Indivisible” with music by Jacob Mitas.  Several of her short dance video works will be screened.

HOLLY JOHNSTON is the artistic director of LEDGES AND BONES, a bi-city contemporary dance company working in both Los Angeles and San Francisco. LEDGES AND BONES promotes cultural consciousness, open dialog, and social justice through live performances, education, and other public forums.  Her choreography has received critical acclaim for “turning the body into a dangerous machine” -Los Angeles Times.  Johnston has received awards from The Maggie Alesse National Center for Choreography, The Zellerbach Foundation, The Joyce Theater A.W.A.R.D.S. Show Grant/Los Angeles, Lester Horton Awards for Outstanding Performance for her solo “experiment one” and was named by Dance Magazine as one of their “25 to Watch” in 2007.

Her work has been commissioned and she has been artist in resident at numerous colleges and universities around the United States including having been guest artist at Stanford University as a contributing choreographer to Stanford production of the Cinderella Principle by Robert Moses, UCLA, Cal State Long Beach, Dance New Amsterdam, San Jose State, Idyllwild Arts Academy, UC Irvine and several others .  She has performed in corporate industrials for Mercedes, Union Pacific Railroad, Volkswagen, The Ritz-Carlton (Cayman Islands), String Theory CD Release (Singapore Tour) and The Grammy’s. http://ledgesandbones.org

GABRIELLE REVLOCK, director of Mano/Damno Projects, is a native Philadelphian. She has received support from the Pennsylvania Council on the Arts, the nEW Festival, the New Edge Mix, the Joyce Theater Foundation A.W.A.R.D. Show! and is currently a 2nd year resident artist in the Susan Hess Choreographers Project. Gabrielle’s performance work has been shown at various venues including the Joyce SoHo (NYC) and the Korzo Theater (The Hague, Netherlands). In 2010 she was resident choreographer at Bryn Mawr College and in 2005 she was selected as Alumnae Choreographer for Vassar College. She is the recipient of a 2010 Rocky (peer dance) Award. As a dancer, she has received three professional development awards from Dance Advance, two which took her to the Netherlands to collaborate and tour with Isabelle Chaffaud and Jérôme Meyer, one which took her to London to dance for Sean Feldman. She has been a company member of Jeanne Ruddy Dance since 2003, performing the works of Mark Dendy, Jane Comfort, Suzanna Linke, and Robert Battle. Other Philadelphia artists Gabrielle has had the pleasure of dancing for include Lisa Kraus, Myra Bazell, Leah Stein, Jumatatu Poe/idiosynCrazy Productions, and Matthew Neenan for the Opera Company of Philadelphia.    www.manodamno.com. “eccentric and often original choreography”   –  Philadelphia Inquirer