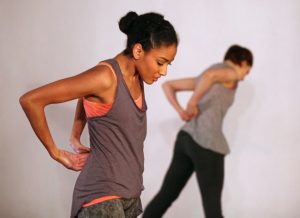 by Marissa Bottino for The Dance Journal

EDITORS NOTE: Marissa Bottino is a junior at Muhlenberg College. During her Sophmore year, she studied with Janis Brenner in a Movement for Actors and Dancers class. During that time, she journaled in response to the class and to performances she saw with the class. Janis Brenner asked Marissa to write this article for the Dance Journal after attending her most recent performance at Chi Movement Arts Center.

What a visual and intellectual treat to watch Janis Brenner and Dancers perform works of ironic social commentary, honest emotion, and contradiction. At Kun-Yang Lin Dancers’ Chi Movement Arts Center on December 11th, joined by students from Temple and Drexel Universities (Lost, Found, Lost), Janis Brenner and Dancers illuminated the intimate space with evocative works that span Brenner’s choreographic evolution from 1991 to 2011. Together, the pieces walk the very line they comment on – the concrete versus the abstract.

In The Awkward Stage (2007), dancers Kyla Barkin and Aaron Selissen casually enter the studio space as new lovers building themselves into runs as if keeping life’s pace with the jubilant Mozart music. Animated and exaggerated movements as well as the dancers’ embodied characters make this piece familiar and comedic, especially when the couple moves away from each other, hands covering their private parts. Snaking arms and jiggling legs against flexed feet and flexed hands are physical indications of the awkward balance in a new relationship between vulnerability and caution. A moment of smack-you-in-the face truth is when Barkin’s double time feet make her follow Selissen’s outstretched palm like a puppy following a treat. They snake their bodies in unison, gesturing as if eating something and throwing it up into the hyper-driven notes of the music. The dancers are still while the music panics in the background. Brenner’s detailed attention to choreo-music relationship is evident here. Brenner’s choice to use a bold child-like gesture, the ‘stop hand’ with a flexed palm, captures the concrete aspect of her intention to show. How gratifying when art can act as a mirror for the audience, getting them to laugh at human nature by saying, ‘Look what you do.’

Duets from Pieces of Trust (1991, Revival 2011), performed by the meticulously focused Sumaya Jackson and Christopher Ralph, portrays a more expected angle of relationships, appropriately matched by its choreographic symmetry. A duet where he ignores her, followed by his solo, her solo of inevitable self-touch, and finally a duet where she ignores him, depicts a predictable failed balance of trust and doubt. Dramatic struggle swallows the piece; she embraces him, he flinches in her arms as if faithless. The silence matches the mood, as do the full swallows of violins. However, clever movement metaphors, such as Ralph’s forced arch body rolls that make him fight for balance, turn depictions into glimpses of intelligent overstatement.

Clever structure and the marriage of text and movement make Brenner’s Lost, Found, Lost (2007, 09) an eye opening, draining, and emotionally cleansing work. Brenner’s decision to enter the audience saying, “I lost my ticket,” invites the audience directly into this artwork’s journey. Trivial loss, such as “I lost my sock,” builds into “I’ve lost my innocence, my courage, my father.” A particularly striking image is Barkin riding a toy horse, listing what she does have. This piece successfully pairs the concrete, as in gestural images of searching, and the abstract, as in the second position plié with both arms extended in either direction. Even more memorable is when the dancers breathe in exaggerated rhythmic patterns of holds and releases, mimicking life’s routine of finding and losing. In the end, dancers crawl downstage to a line of objects. Kneeling, they stare down at what they have found in a most honest image. Having followed the tension and release of the entire work, the audience feels as drained and as calm as the dancers.

Brenner’s most recent work, The Mind-Stuff Variations (2011) is truly enlightening in its use of vignettes and voice to explore aspects of metaphysical movement and metacognitive viewership. Physical communication on stage exemplifies the strong collaboration of Janis Brenner and her company. This is ironic since the piece begins with the company listening to Janis talk through centering exercises as they give up one at a time, matching the somber violins. The most telling vignette involves the gorgeously efficient Kyla Barkin as she reads excerpts from William James’ Mind Stuff Theory. As a ticking track plays, she mechanically keeps her eyes on her book and two men lift and manipulate her body. One nudges her with his head and the audience smirks in response to such a smart and humorous detail. The work proves its self-awareness when orders of extreme experimentation build into Barkin on Ralph’s back as she sings a Chinese song over his intermittent laughter. The dancers on stage get the audience to laugh at their frustration. They dance together, yet they are architecture. The company challenges the audience with contradictions. Janis’ solo gracefully and eccentrically moves from pain to painting, from thinking to doing – process. She makes sense (a dancer moving), but she is also abstract (a creature being something else). Finally, the work speaks for its facilitators and crosses the boundary of leader and follower as the manipulator and mover speak to one another. The piece lets imagery and intention illuminate the mind and stimulate the body.

Brenner tells the audience to be inspired – inspired by comic and tragic truth. Her intelligently crafted and intricately performed works do not try to rationalize life, but rather let them inform how we look at life and life in art.