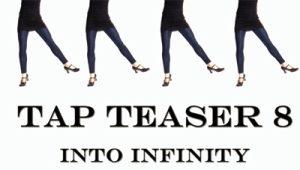 by Kat Richter, MA for The Dance Journal

It’s been a good year for tap in Philly, and what better way to celebrate than with an evening of live jazz and tap at the Community Education Center?  The newly remodeled Community Education Center remains one of the only venues that rents rehearsal space to tap dancers and Tap Teaser 8 marked the fourth anniversary of the bi-annual showcase, produced by Philadelphia native Pamela Hetherington.

The tap community is small, however, so rather than deny the fact that I’ve worked with Hetherington on numerous projects (including an entire show for the Philadelphia Fringe festival), I’m going to admit that I have.  I’ve also danced/jammed/auditioned with almost everyone in the show—does this make me less objective as a critic?  Absolutely, but it also means that I “get” what’s going on when the band looks to the dancer to set the tempo; I’m in on the joke when one of the female soloists bows after an a cappella rendition of the Shim Sham and then proceeds to tap the pants off of the simple, decades-old routine.  So let’s acknowledge this and move on, shall we?

Khalil Munir was solid as always, effortlessly inventing new rhythms on the spot and turning them inside out and on their heads.  Although Justin Ballasy seemed a bit “off” at the beginning of his solo, he’s to be forgiven: he’s still in high school, after all, and he can do more with the side of his foot than most dancers ever dream of.

Shawn Hilton and David Perschica, however, charmed the audience with their theatrical renditions—Perschica with an ode to tap that was straight out of Fiddler on the Roof (ever seen a man tap dancing with a bottle balanced on his head before?  I didn’t think so) and Hilton with an understated but enthusiastic solo that demonstrated his sheer love and understanding of the art form and its subtleties.

Tweety Klevence went from sassy to sweet, first reprising the solo she danced in Too Darn Hot this past September and then appearing hand-in-hand with her son, Max Klevence.  The pair are quickly earning a reputation, but then again, who can resist an eager six year-old in tap shoes when his mother helps him remove his suit jacket so he can solo to Willow Smith?

The highlight of the evening came with a trio performed to the tap standard “Cute.”  Choreographed by Mike Minery and Sarah Mason and performed by Mason, Becky Mastin and Katie Delhagen, the piece was everything that good tap should be: high energy, rhythmically inventive and entertaining.  Dressed in men’s dress shirts, black capris and colored neckties, the three women hit the floor and hit it hard, nailing the stop time and raising the bar, one riff at a time.

If it sounds like an odd smorgasbord of talent, that’s because it was.  Showcases always are, but odd should not be mistaken for amateur; the band, which included local musicians Joshua Machiz. Alex Maio and Frank Velardo, was top notch and Hetherington’s “Teaser” series has served its purpose: the city’s appetite has been whet.  It’s time for more.