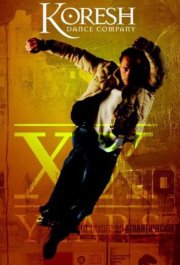 By Merilyn Jackson
FOR THE INQUIRER

What a wonderful thing when a city’s audience base sustains an arts organization for two decades or more. Koresh Dance Company’s 20th anniversary year is upon us, and the company proved that it deserves this longevity with its fall season opener at the Suzanne Roberts Theatre Thursday evening. The program was simply a stunner with in-your-face, all-out dancing by  the 10-member troupe.

I have observed in the past that Koresh’s programs are not usually particularly  varied, but this pastiche of “agonizingly chosen” excerpts from his favorite works (as Roni Koresh expressed  it before the show) gave the lie to that.

With his Israeli and jazz-based background, Koresh (who just turned 50) often uses socio-historical, folk, and biblical motifs with wit and playfulness, sensuality and menace. His 1992 Facing the Sun opens with a steam engine’s glaring headlight bearing down on the audience and the chug of a train. In this epic work the full company faces the menace of the Holocaust while heroically striving to remain committed to their community until one by one they are shot dead

If I have not said enough about Melissa Rector’s dancing over the years, here’s this: After 20 years with Koresh, she is still just about the best-trained dancer in the city. I don’t know how it’s possible to keep improving while other dancers would be declining, but she does.

Merilyn is a guest contributor to the Dance Journal. She writes regularly on dance for The Philadelphia Inquirer since 1996 and writes on dance, theater, food, travel and Eastern European and Latin American fiction for many publications. More than 800 of her articles have appeared in publications as diverse as The New York Times, The Warsaw Voice, The Arizona Republic, The Phoenix New Times, MIT’s Technology Review, and Arizona Highways, Dance, Pointe and Dance Teacher magazines, Broad Street Review and www.exploredance.com.