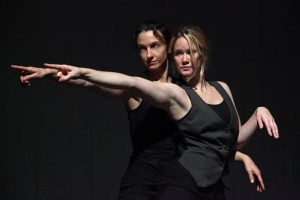 By Dena Scott for The Dance Journal

This season’s Spiel Uhr by Group Motion and under the direction of Manfred Fishbeck, created a series of mesmerizing movement and visual constructs though a multi-disciplinary approach that left one contemplating the very core of our humanity.

The featured piece of the evening was Scwarzer Tod and The Useless Eaters, an interrogation of violence, transcendence and liberation beautifully balanced with the use of dance, music, video and spoken word.  Based on artist and writer Quintan Ana Wikswo’s haunting fairytale of innocence in the midst of genocide during the 1351 Black Plague in Germany, dancers Marie Brown, Ellie Goudie Avrill, Lesya Popil and Hedy Wyland offered a striking glimpse of a child’s destiny caught in the netherworld between beasts below a bridge in the forest and those above it. Set to haunting moving images of the Black Forest created by Quintan Ana Wikswo, spoken text in German read by Manfred Fishbeck and eerie music accompaniment by Andrea Clearfield, the piece was fierce, moving and powerful in its tackling of such an unsettling atrocity, leaving a clear warning that such injustices can still happen today.  At times, the visuals were overwhelming in its subtleties and nuances, but in a good way, that left you with more questions and a desire to see it again.

Continuing with the mix media of dance and film, Manfred offered up Light Search featuring a solo by Marie Brown with an on camera presence of Emily Huber.  Choreography by Manfred, mixed with a video and sound montage of images by Manfred and John Luna, were simply captivating. Marie’s subtle but deliberate movements with overlaid projections were masterful in their construct.

After a brief pause in the program, an excerpt of Lesya Popil’s Univited Guests gave us a look in to the subconscious mind that was disturbing in content but in execution as well.  While a glimpse of unwanted thoughts that can enter our minds, the transitions between those thoughts and accompanying movement felt at times disjointed, random and even scattered… but then I suppose, that is what disturbing thoughts will tend to do.

Eleanor Goudie-Averill performed her solo, Convictions, which she choreographed and first presented at the Philadelphia A.W.A.R.D. show earlier this year. It depicts an internal struggle to express strong beliefs and opinions. The piece itself seems to have evolved with time and Ellie’s movement and stage presence are simply infectious to watch. 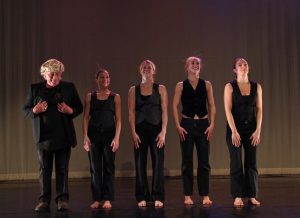 The evening was capped off by a guest appearance of Wolgang “Manfred” Mozart on the keyboard with a series of themes and variations danced by the cast that brought a lightheartedness to what was otherwise an evening of more serious subject matter. Long live Mozart and the creative offerings of Group Motion!

***All photos by Bill Hebert