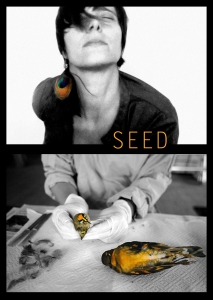 by Merilyn Jackson for The Inquirer

Tui is the Maori name for a black bird with a small white tuft at its throat. When the English came to New Zealand, its native habitat, they named it the parson bird. Tuis are honey eaters; they have two voice boxes, and some of their sounds range beyond human hearing. On opening night at Subcircle’s Christ Church fall run, called Seed, Gin MacCallum and Niki Cousineau danced like two wavering voices that hushed us and left us craving to hear and see them.

Cousineau and MacCallum choreographed, and New Zealand’s Carol Brown, who has worked with Subcircle and Group Motion here in past years, directed. Jorge Cousineau created a spare and moody set, vaguely reminiscent of the Mutter Museum, with glass-doored specimen cabinets on either side. His video screen runs on a wide band across the stage and slowly morphs through organic, sepia-toned scenes. The Cousineaus run Subcircle and are both recent, and very deserving, independent recipients of Pew Fellowships.

I can’t stress enough how enjoyable it was to see MacCallum dance here again, after her departure from Philadelphia. She’s an artist whose mysterious quality reminds me of a 19th-century poet – frail, romantic, possibly a little shy or neurotic. Paired with Cousineau’s cool rationality, it made for a glorious frisson that lasted throughout the one-hour dance theater piece. Together they wove a spellbinding web of fantasy.

Merilyn Jackson
Merilyn is a guest contributor to the Dance Journal. She writes regularly on dance for The Philadelphia Inquirer since 1996 and writes on dance, theater, food, travel and Eastern European and Latin American fiction for many publications. More than 800 of her articles have appeared in publications as diverse as The New York Times, The Warsaw Voice, The Arizona Republic, The Phoenix New Times, MIT’s Technology Review, and Arizona Highways, Dance, Pointe and Dance Teacher magazines, Broad Street Review and www.exploredance.com.