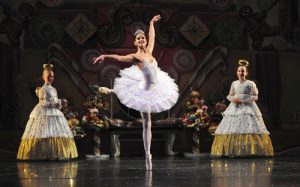 By Jennifer Lin for The Dance Journal

In 1980, former Pennsylvania Ballet dancer Marilyn Budzynski decided to stage her own version of Tchaikovsky’s “The Nutcracker,” with new choreography from start to finish. More than 100 performances and 30 years later, her production of this holiday classic is still going strong, with the Doylestown-based ballet company she founded, Dance Theatre of Pennsylvania.

This is the longest running production of The Nutcracker in Bucks and Montgomery counties  Budzynski attributes this to her production being “quirky and different”.  “When it came time for me to consider my own choreography, I wanted to tell the story in a different way,” said Budzynski.

The ballet opens with a Christmas party at the Silverhaus home, with the action centering on Clara and her brother Fritz. In her interpretation, Budzynski said she wanted to capture the tenderness between the siblings. “Clara is not entirely an angel – and Fritz is not entirely a devil,” she said. When creating the new choreography, Budzynski used her own children – Clarissa and Chris — as inspiration. Her son, Chris Budzynski is now a principal with Pittsburgh Ballet Theatre.

As a professional dancer, Marilyn Budzynski has danced in the Nutcracker “hundreds and hundreds of times,” beginning as a 15-year-old student at the prestigious North Carolina School of the Arts. “One of my pleasures in staging this ballet every year is I like to fiddle with it,” Budzynski said. “And as the years have gone on, I have introduced new characters and subplots.”

A highlight of her production is the Russian dance in Act Two, which was choreographed by Michael Krochak, a former dancer with the Voloshky Ukrainian Dance Ensemble and a member of the faculty of Budzynski Studios, the affiliated school of Dance Theatre.  Budzynski described the authentic dance as “heart-pounding.”

Among the featured dancers in this year’s show are Maria Phegan, a former dancer with San Francisco Ballet and Houston Ballet; and Kelsey Coventry, previously with Complexions Contemporary Ballet and BalletX. In addition, James Ihde, a soloist with the Pennsylvania Ballet, and Chris Jones, a former member of the company, will perform the Snow and Arabian pas de deux.

The Nutcracker also will present the more than 30 members of the pre-professional Dance Theatre.

“I never get tired of doing the Nutcracker,” Budzynski said. “I have new characters and new dances and every dancer brings a new interpretation. The production is constantly evolving and always fresh for me.

After a sold-out run last year, Dance Theatre will present its 31st season of the Nutcracker at Central Bucks South on Saturday, Dec. 17 and Sunday, Dec. 18. Tickets start at $15 and can be purchased at www.dtopa.org.