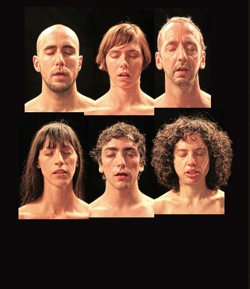 The 2011 Philadelphia Live Arts Festival brings world-class contemporary dance to Philadelphia. Acclaimed American choreographer John Jasperse will offer the World premiere of the new evening-length work Canyon. The New York choreographer’s collaborative new work captures the wonder of the ineffable. Six dancers, including Jasperse, create a space where the supremacy of the intellect is humbled into a state of awe, where you lose yourself in the transformative power of pure visceral experience. Integrating an evocative musical score and striking stage design, Canyon plays with engineered disorientation, sensory overload, spaciousness, fractured connectivity, and rapture.

What’s the process of creation in such a work? What is the format you use or have created in order to achieve a complete work?
I’m really interested in this work in the experience of dis-orientation, where I momentarily lose my ground. I try to do this in a lot of different ways. I’ve created scores which limit our information, where “confusion,” guessing, and intuition are built into the decisions that get made. I’m trying to build experiences like anticipation into what the work is.

How do you see audiences relating to and connecting with the work?
I see this work in terms of visceral experience, even though the audience will not move around the space in an installation format. I think intellect will be a part of the experience for the public, but perhaps less central than in some of my other work. So much of the work that I have seen over the years which is clearly understandable is of limited interest to me. I have seen many works over the years, which seem like they would have been much better off being essays rather than art works. For me, powerful vibrant art exists in the space beyond language – when language hits a wall and can’t go any further, the space on the other side of the wall is where art lives.

John Jasperse
John Jasperse (choreographer/director/performer) has been presented by the Joyce Theater, the Museum of Contemporary Art in Chicago, Walker Art Center, The Brooklyn Academy of Music, and many others. In addition to the John Jasperse Company, Jasperse has created works for the Baryshnikov Dance Foundation, the Batsheva Dance Company, and the Lyon Opéra Ballet. His work has been awarded several prestigious awards both in the U.S. and abroad, including a New York Dance and Performance (“Bessie”) Award in 2001 in recognition of his body of choreographic work. His work has been supported by fellowships from Foundation for Contemporary Performance Arts, Tides Foundation’s Lambent Fellowship in the Arts, John Simon Guggenheim Memorial Foundation, National Endowment for the Arts and New York Foundation for the Arts, among others.