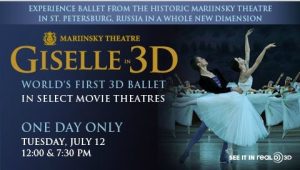 NCM Fathom presents GISELLE IN 3D, the world’s first 3-D ballet to be shown with RealD™ 3D technology, for one day only  on Tuesday, July 12 at Noon followed by a second performance at 7:30 p.m. (both times local). Pre-recorded at the historic Mariinsky Theatre in St. Petersburg, Russia, GISELLE IN 3D captures the beauty and movement of a world-class performance in a new and multi-dimensional way, offering cinema audiences a ‘best seat in the house’ experience from anywhere in their local theater.

“We are delighted to be working with NCM Fathom to distribute Giselle in 3-D across the States – a partnership which will drive the next stage of the ballet’s hugely successful global roll-out,” said Christine Costello, More2Screen managing director.

Giselle is the story of a simple village girl who falls deeply in love with a dashing prince disguised as a peasant. The idyllic pastoral scene is shattered by an act of betrayal and the ensuing heartbreak. In the ballet’s second act, Giselle haunts the stage with her host of vengeful spirits, but ultimately the strength of her love transcends even death and bestows forgiveness upon her repentant lover. The ballet stars Natalia Osipova as Giselle with Leonid Sarafanov as Count Albert.

“Fathom brings another ‘first’ to movie theaters with the world’s first ballet in 3-D,” said Dan Diamond, vice president of NCM Fathom. “This is truly a must-see event and audiences across the U.S. will be mesmerized by the view from their front row seat at the famed St. Petersburg’s Mariinsky Theatre during this performance of the classic Giselle.”

Ever since its founding in 1860, the legendary Mariinsky Theatre of St. Petersburg, Russia has been at the forefront of artistic and musical development which continues today with Giselle in 3D, the first-ever worldwide release of a ballet in 3-D. For more than 20 years the Mariinsky Theatre has been led by Maestro Valery Gergiev who has transformed the Mariinsky into a global theatre presenting international tours in dozens of countries each year. He has also made technology and media a critically important part of the Mariinsky with the launch of its Mariinsky Label and various other initiatives including this groundbreaking 3-D project. The US release of Giselle in 3D coincides with the Mariinsky Ballet’s residency at the Metropolitan Opera House during the Lincoln Center Festival. The company performs three programs multiple times beginning on July 11. 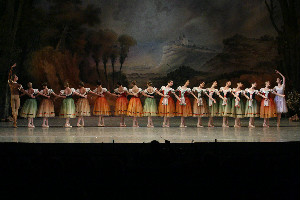 Area Theaters that will be hosting this film are:

Tickets for GISELLE IN 3D are available at participating theater box offices and online at www.FathomEvents.com. For a complete list of theater locations and prices, visit the NCM Fathom website (theaters and participants are subject to change).