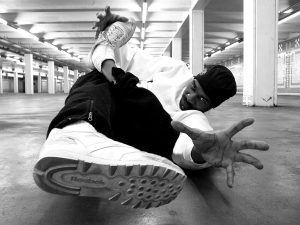 Article written by Joanna L. Mullins for The Dance Journal

After their opening “48 Hours” performance in December 2010, MacArthur, Revlock and Xavier worked with the 2009 Guggenheim Award-winning New York performance artist Ralph Lemon in a three-day Masters Exchange session over March 25-27, 2011. The local artists, Lemon, and Artistic Director Susan Hess engaged in intense studio work probing such concepts as risk in performance (including the multiple types of risk that come from encounters with a stool).

All three local choreographers performed in the Dance Affiliates and Joyce Theater Foundation co-presentation of “The A.W.A.R.D. Show!” (Artists With Audiences Responding to Dance), May 18-21, 2011, at the Arts Bank. SHMD alumnus Meredith Rainey won the competition, and Revlock was one of the two runners-up.

The pieces presented June 11-12 reflect a clear line of development from the “48 Hours” exercises through the work with Lemon. Ideas explored in the packages of directions that the artists exchanged for the opening performance have surfaced in work throughout the season, expanding beyond the 48-hour time restriction on a piece’s development. Pushing past internal limits and dedicating themselves to exploration, the choreographers have integrated their work with Lemon into the artistic process.

The SHMD Choreographers Project /Masters Exchange (CP/ME) has funded space at the Performance Garage for these dance artists’ regular rehearsal and development of work over 2010-2011, as well as for the two performances and the master teaching session. MacArthur, Revlock, and Xavier have all been invited back for a second season of residency in 2011-2012.

With a history of over 30 years of serving dancers, choreographers and performance artists in Philadelphia, SHMD continues to play a leading role in fostering talented independent dance artists and bringing their innovative concepts to local audiences. The activity of CP alumni in venues throughout the city, nation, and world is a testimony to the importance of dedicating close attention and resources to the career development of emerging artists. 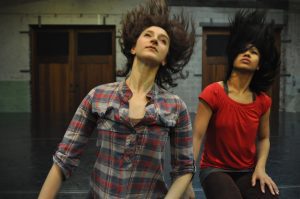 Bronwen MacArthur has danced with many companies in New York and Denmark, including those of Bill Young, Gina Gibney, Robin Becker, Donna Uchizono, Sara Gebran and Tim Feldmann. She formed MacArthur Dance Project (MDP) in 2007 as an umbrella for her choreographic work, which has been performed in Philadelphia, New York, New England, Russia and France. MDP has been featured in the documentary Coming to Grips, produced and directed by Emmy-nominated filmmaker Lori Petchers and installed at New York’s Dance New Amsterdam. It is also featured in webisodes of the Mr. Nice series Haute & Bothered on Teen.com. MacArthur has international teaching experience and was guest instructor at Connecticut College and taught in the Theater Studies department at Yale University.

Native Philadelphian Gabrielle Revlock is director of Mano/Damno Projects and has shown her work at the Joyce SoHo (New York) and the Korzo Theatre (The Hague, The Netherlands), among other venues. She was resident choreographer at Bryn Mawr College in 2010 and received a Rocky Award the same year. Revlock is a company member of Jeanne Ruddy Dance and has worked with local choreographers Myra Bazell, Lisa Kraus, Leah Stein and Matthew Neenan, as well as international artists Sean Feldman (UK), Willi Dorner (Austria) and Butoh master Katsura Kan (Japan). She is also a filmmaker, whose works were shown at Philadelphia Dance Projects’ 2007 and 2008 dance film festival “Moving Pictures,” and a published photographer in Smithsonian and Bust Magazine.

Raphael Xavier is an award-winning artist from Wilmington, Delaware, now living in Philadelphia. A Pennsylvania Fellow of the Arts in Folk and Traditional forms, he has been a Breaker for over two decades and has worked as a professional artist in a variety of fields, including music, photography and film. He co-founded olive Dance Theatre (oDT) in May 2002 with Jamie Merwin, and his choreography has been performed by oDT and by Companhia Urbana de Dança of Brazil. He has performed at the Kennedy Center in Washington, D.C.; Dance Theater Workshop in New York; the Wilma Theater and the Painted Bride Arts Center in Philadelphia; and in Lithuania. An alumnus of Rennie Harris Puremovement, Xavier has established Breaking as a traditional folk art in the City of Philadelphia, as well as in master and apprentice programs funded by Pennsylvania’s Institute for Cultural Partnerships.

The 2010-2011 Choreographers Project at SHMD has been supported by The Pew Center for Arts & Heritage through Dance Advance. Additional support has been generously provided by the Philadelphia Cultural Fund, the Suzanne F. Roberts Cultural Development Fund, RBC Wealth Management, the SHMD Board of Directors and individual contributors.