From September 2 – 17, the annual Philadelphia Live Arts Festival will celebrate its 15th Festival year with 16-days of nonstop groundbreaking performances and wild creativity. The Festival features cutting-edge dance, theater, music, and interdisciplinary works by renowned artists from the U.S. and international contemporary arts scene. A platform for daring, innovative, and highly interdisciplinary artists, the 2011 lineup emphasizes the Festival’s continued commitment to the development of new work with 9 World premieres, while also bringing leaders of the contemporary art world to Philadelphia stages with 3 U.S. and 3 Philadelphia premieres.

Alongside artists from Philadelphia and New York, the Philadelphia Live Arts Festival will host internationally acclaimed artists from Austria, Belgium, Canada, England, India, and France, making the city an unparalleled place to experience great art from the region and around the world.

“The centerpiece of this year’s Festival is a series celebrating intercultural practice, as different worlds and dance traditions meet on the contemporary stage,” says Producing Artistic Director Nick Stuccio. “The series features the work of Shantala Shivalingappa and Sidi Larbi Cherkaoui, two dancers not often presented in the U.S. Our programming offers audiences the opportunity to experience the only U.S. engagement of their high-spirited performance Play, alongside the Philadelphia premiere of Namasya which features solo works choreographed expressly for Shivalingappa by dance titans Pina Bausch and Ushio Amagatsu, among others.”

“As we move into our 15th year as a performing arts presenter, we’re beyond excited to bring the spectacular acrobatic show Traces by Montreal’s 7 Fingers to The Merriam Theater stage in our largest presentation to date,” continued Stuccio, “while also presenting intimate works of experimental theater, like Lucidity Suitcase Intercontinental’s WHaLE OPTICS and The Devil and Mister Punch by the UK theater company Improbable.”

Live Arts Festival performances take place at venues throughout the city of Philadelphia from the streets of Old City’s historic district to the Merriam Theater on Philadelphia’s the Avenue of the Arts. Additional spaces include Christ Church Neighborhood House; Arts Bank at The University of the Arts; Suzanne Roberts Theatre, home of Philadelphia Theatre Company; Prince Music Theater; The Wilma Theater; the Zellerbach Theatre at the Annenberg Center for the Performing Arts; and the Festival’s own Live Arts Studio, with more traditional and unusual performance sites to be announced.

Together, the Philadelphia Live Arts Festival and Philly Fringe draw tens of thousands of people who come to be a part of “Festival time” in the city – to see innovative work, meet new people, and interact with over 2,000 artists performing in over 1,200 performances. Founded in 1997 as the Philly Fringe, the Festival, now in its 15th year, has developed into an internationally recognized presenting organization and performing arts destination, garnering critical praise, national grants, and numerous awards. 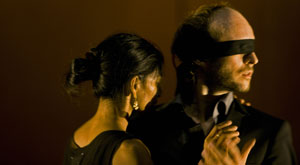 Born in Chennai, India and raised in Paris, Shantala Shivalingappa is the child of east and west and a master of Kuchipudi, a classical dance form of South India. Sidi Larbi Cherkaoui was born in Antwerp, Belgium of a Moroccan father and Flemish mother. The late, great German choreographer Pina Bausch suggested that the two work together. Play is an intercultural dance dialogue, a celebration of aesthetic and form. The performance features a live ensemble and interaction with musicians and other theatrical elements, as Shivalingappa and Larbi discover one another by playing through dance. 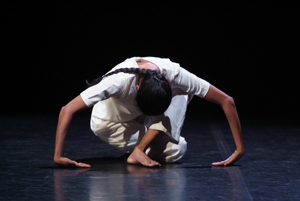 Namasya, Sanskrit for “reverence” or “to pay homage”, will showcase Shantala Shivalingappa in a solo in four parts, with pieces choreographed by Pina Bausch, Ushio Amagatsu, Shivalingappa and the dancer’s mother, the acclaimed choreographer Savitry Nair. Namasya is presented in association with the Annenberg Center for the Performing Arts where Shivalingappa will perform a traditional Kuchipudi piece in the Fall. 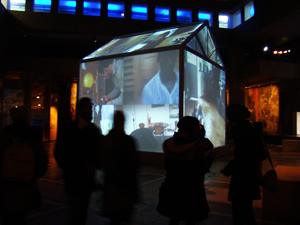 Zon-Mai, the Philadelphia Live Arts Festival’s first-ever large-scale visual art presentation is an installation in motion by Sidi Larbi Cherkaoui and Gilles Delmas. Zon-Mai will be erected during the Festival in a Philadelphia warehouse. At the crossroads between architecture, art, and dance, Zon-Mai – which translates to “at home, elsewhere” – is a giant house of screens featuring projections of 21 dancers performing inside their own bedrooms, kitchens, bathrooms, and living rooms around the world.

Austria’s Cie. Willi Dorner returns to the Live Arts Festival for the World premiere of a new untitled participatory work commissioned by Live Arts and made possible through support from PNC Arts Alive. The creator of above under inbetween (‘09) and the wildly popular bodies in urban spaces (‘08) will bring a free outdoor performance to the Old City neighborhood of Philadelphia. Guided by a map, audiences will choose their own path, following the movements of fifteen Philadelphia dancers, amidst a cast of 50 pedestrians involved in the site-specific performance.

The site-specific Red Rovers by the imaginative Philadelphia-based Headlong Dance Theater (More, ‘09; Cell, ‘07; Hotel Pool, ‘04), in collaboration with visual artist Chris Doyle, explores the lives of robots on Mars and the scientists who created them. In the participatory performance, the audience will interact with scientists of NASA’s Jet Propulsion Laboratory.

The Radio Show, a Philadelphia premiere, by New York-based choreographer Kyle Abraham is a dance narrative investigating the effects of the abrupt discontinuation of a black radio station on a community and the lingering impact of Alzheimer’s and aphasia on a family. Performed by Abraham.In.Motion, the 2010 Bessie Award-winning dance evokes memory and a passion for what is lost, mixing an eclectic score of classical soul and hip-hop with contemporary classical compositions. The Radio Show is presented in association with the Annenberg Center for the Performing Arts.

MULTIDISCIPLINARY
The Live Arts Festival’s largest presentation to date is the Philadelphia premiere of Traces, by the high-energy urban acrobatic troupe 7 Fingers, at the 1,842-seat Merriam Theater, in a co-presentation with the Kimmel Center for Performing Arts. The Montreal-based contemporary circus troupe threads a narrative through circus arts by integrating every mode of expression into performances, from theater, music, song, dance, speech, and high-risk acrobatics.

In a co-presentation with bowerbird, the Festival will present the U.S. premiere of French choreographer Xavier Le Roy’s expressive multi-disciplinary work More Mouvements für Lachenmann based on the music of contemporary German composer Helmut Lachenmann. The performance features members of the Austrian new music ensemble Klangforum Wien in a hybrid musician-dancer role, performing both the music and the physical and visual action of “sound making” as Le Roy stages the relationships between what can be heard, seen, gesticulated, moved, and imagined around the bodies of musicians and their music.

The Philadelphia Live Arts Festival will continue to investigate alternative performance spaces with a theatrical experience that begins entirely online. New Paradise Laboratories (FREEDOM CLUB, in collaboration with Riot Group, ’10; FATEBOOK, ’09; BATCH, ’07) will present Act 1 of Extremely Public Displays of Privacy, a World premiere exploring online public life, which will unfold during the Festival, blurring the lines between real-world and online experiences.

PROGRAM INFO/TICKETS
The Philadelphia Live Arts and Philly Fringe Festival runs from September 2 – 17, 2011. Tickets for most shows are priced between $10 and $30. Some shows are free. Students and Festival goers 25 and younger pay $15 for Live Arts Festival tickets and receive $5 off Philly Fringe tickets which are priced above $10. Discounted tickets are available to Festival Members. Festival Members save 20% on all shows plus 10% at top Philadelphia restaurants. A Festival All-Access Pass ($400 for a one-person pass, or $800 for a two-person pass) grants admission to every Live Arts Festival and Philly Fringe show, 20% for up to 3 additional tickets per performance, and ticket exchange service up to 48 hours prior to show time. Groups of 10+ save 25%.

Philadelphia Live Arts Festival tickets will be available for online purchase beginning in mid-June at www.livearts-fringe.org, or after Monday, August 22 for phone and walk-up sales at the Box Office at (215) 413-1318. Philly Fringe tickets will go on sale online in July. The 2011 Festival Box Office will be located at the Prince Music Theater at 1412 Chestnut Street. The Festival Guide, which includes descriptions of each performance, in addition to dates, times, locations, and other Festival information, will be widely available throughout the city beginning the first week of August. Tickets to Traces, a co-presentation of the Philadelphia Live Arts Festival and the Kimmel Center for the Performing Arts will be available mid-June at www.kimmelcenter.org.

ABOUT THE FESTIVAL
The Philadelphia Live Arts Festival features performances by renowned contemporary performing artists from the U.S. and around the world who are selected and invited to the Festival by Producing Director, Nick Stuccio. The Philly Fringe is an unfiltered Festival, where new and established artists of all kinds present their own work, free of a selection process. Together, the Philadelphia Live Arts Festival and Philly Fringe establish Philadelphia as a city bursting with wild creativity, bringing audiences sixteen days of the most stimulating, provocative new art being created in Philadelphia, across the U.S., and around the world.