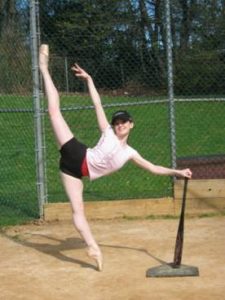 Local ballerina Phoebe Gavula, age 16, of Metropolitan Ballet Academy (MBA) in Jenkintown, achieved the statistical equivalent of signing with the Phillies last month when she landed a professional contract with Pennsylvania Ballet 2, the second company of Pennsylvania Ballet.

MBA Artistic Director, Lisa Collins Vidnovic, herself a former member of Pennsylvania Ballet, is especially proud of her student.   “Phoebe has studied at MBA since the age of 3. It has been a nothing less than a joy to participate in her growth as an artist and athlete. The entire faculty, her fellow classmates and I are thrilled with this incredible accomplishment.”

Gavula, too, is still pinching herself. “I knew that there were many amazingly talented dancers also competing for this position, so winning this contract is very exciting… I am so grateful and just awestruck that it has happened to me, and I’m still trying to convince myself it actually happened,” she said. “It’s a huge honor to be able to call myself a part of the company.”

Born in Abington, Gavula began dancing with Metropolitan Ballet Academy (MBA) in 1996 at the age of three. In 2006, she became a member of Metropolitan Ballet Company, MBA’s pre-professional training company, where her principal roles included Bluebird, Spring Waters, Paquita, and Don Quixote Pas de Deux, Gretel in Kanji Segawa’s Hansel and Gretel, Cinderella, and Balanchine’s Serenade and Valse Fantaisie, among others. 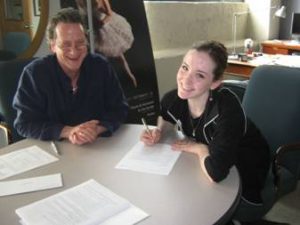 Her numerous awards include the 2009 and 2010 Barbara Weisberger Northeast Regional Founder’s Award at the Regional Dance America / Northeast Festival (Ms. Weisberger is the founder of Pennsylvania Ballet), and most recently,  the 2011 Youth Grand Prix prize at the Youth America Grand Prix Philadelphia regional semi-finals, where she continued to the Final Round of the New York Finals. Ms. Gavula also won acceptance and attended the  summer study programs at American Ballet Theatre in New York City , Central Pennsylvania Youth Ballet on full scholarship from Philadelphia Dance Access, the Bolshoi Ballet Academy on a full scholarship,  and San Francisco Ballet School on a half scholarship.