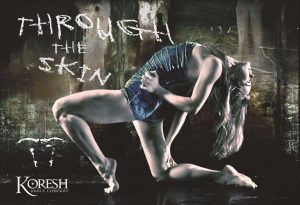 by Amy Harding for The Dance Journal

They are known for technical excellence, flawless execution, and passionate expression. Koresh Dance Company’s new work “Through the Skin” is both new and yet familiar in the most positive ways imaginable. In this work, the technique is both present, yet invisible.  The dancers embody the human flaws and vulnerabilities that speak to the core of the viewer by bringing to life an entirely new world onstage.

Upon first entering the theater, I was surprised to see a movie-size screen covering the curtain showing documentary footage that was a result of a PNC Arts Alive grant aimed at capturing and sharing Koresh’s rehearsal and creative process “behind the scenes”. This personal look at the dancers, directors, and collaborators journey brought the audience in closer to the work and at times offered certain understandings that might not have been otherwise possible.

As the screen magically disappeared and the Board President finished his curtain speech, Artistic Director Roni Koresh explained that “Through the Skin” is meant to be felt more than understood. He cautioned the audience not to seek a narrative that can be mentally examined, but to open themselves to letting the dance speak to a place within the self that is beyond logic and definition.

The curtain opened on the Koresh Youth Ensemble performing work by Assistant Artistic Director Melissa Rector. These dancers gave their all in true Koresh style. They danced in unison without a discernable rhythm to guide them at times. They created tension and exuded emotion giving a picture of experience beyond their years. It was surreal to look upon their shining smiles during the bow and realize that these young ones had just opened the show with such maturity and grace. They are clearly well on their way to becoming professionals at their craft.

Next, the curtain rose for “Through the Skin”. 2 dancers enter the stage and set the tone of the piece in a beautiful duet. The movement seemed almost like a ritual of greeting the sunrise, honoring the space they were occupying, and bathing everyone in warmth and light. The full company then takes the stage. Melissa Rector captivates with a piercing gaze out into the crowd. Movement to the spoken words of the poem “Through the Skin” by Karl Mullen gave way to silly moments of Eric Bean hopping across the stage and crazy moments of convulsing on the floor. Koresh moved us between duets, trios, and group sections seamlessly while leading us on a journey into the multiple facets of existence. Time seemed to stand still while we flew through the many sections of this dance. This piece was much lighter than some of the other work I’ve seen from Koresh. It incorporated humor, silliness, and a sense of abandon that allowed a certain freedom within the movement structure.

I felt my body start moving along in my seat when a trio of ladies in polka dot pants and bras took the stage with sensual choreography. Koresh’s partnering flowed easily during the subsequent quartet section where pushing and pulling duets brought to mind a battle for control. Melissa Rector then took the stage standing with presence like an otherworldly goddess. The ensuing duet between Melissa Rector and Micah Geyer was impeccable and provided one of the most emotional sections for me as an audience member. As we continued forward, I could feel every drop to the floor by Asya Zlatina even though appearing completely effortless. I was drawn to watch Jessica Daley in her performance of the movement as if she lived in that space. Shannon Bramham flits across the stage and back like a pixie. Her duet with Joe Cotler is brief, but amusing. When she weighs her options and makes her decision toward the end, I felt my head nod ‘yes’ right in time with her as if I were somehow a part of what was going on and completely agreeing with the decision.  I had been integrated into this world and I cannot pick a specific point or moment where it happened – it just crept up on me and became a part of me. After another energetic duet, intermission separated me from the world by which I had previously been enveloped.

During the second act, I felt a little disconnected as it started and disliked the separation of the intermission as I longed to maintain that bond that I felt previously. The masterful lighting by Robb Anderson slowly pulled me back in as the dancers each gained their own spotlight on stage. The play of the light off the costumes made them glow at times providing a very visually appealing and dramatic scene. The second act discontinued the duets, trios, and groups from earlier, and focused on the company as a whole from beginning to end.  In this, it was still interesting and beautiful, but as far as feeling went, I felt less connected here. You would think that group movement would cause you to be more overwhelmed with the emotion – like 10 voices talking at once, but I did not feel the latter half of this dance as much as the first. I’m not sure of the exact reason why. I was still amazed by the beauty, strength, control, and commitment of the dancers.  Others may not agree with my feeling of disconnection here, but I think each audience member took an individual journey as part of this show and we all connected with the parts of the dance that resonated with us the most. I am glad to have felt that connection where I did and perhaps if I went to see it again at a different time, I would have a totally different experience. I think that’s entirely possible with this piece. It will change for the viewer over time according to who the viewer is and where that person is in their experience of life. This piece is timeless in that way. It’s also very personal in how it speaks to one’s very core – the part within each of us that maintains a connection to the whole. It was as if that connection was awakened through this dance where it had previously lain dormant, and there is no doubt that each person in the audience felt it on a different level and had an extremely individual experience while still being a part of the whole in that space during that time.

The thematic movement glimpsed throughout the show connected the many sections and made it cohesive. The emotion and purpose behind the piece took viewers beyond the surface into a new realm of existence. Koresh showed his complete understanding of the theater and displayed his expertise at guiding the eye of the audience through the staging of the choreography.  He interweaved humor with drama like a true craftsman and created a piece that touched the hearts of everyone in the theater in some way, shape, or form. Even more, he stepped out of a comfort zone and expanded into a new movement vocabulary while also retaining some of the distinct features that audiences have grown to love about his work. He continues forging ahead with his own language of dance infused with passion, vibrancy, and purpose. I look forward to seeing how he and the company continue to evolve in the future.