Susan Hess Modern Dance, the 2010-11 Choreographers Project launches its season with two weekend performances of “48 Hours” on Saturday, December 11, and Sunday, December 12, 7:30 pm, at the Performance Garage on Brandywine Street.

New residents Bronwen MacArthur, Gabrielle Revlock, and Raphael Xavier will be tackling the “48 Hours” assignment, adapted from the Philadelphia 48 Hour Film and Theater Projects to dance performance by CP alumna Devynn Emory in 2005.

In “48 Hours,” each artist works under the directions provided in two mission packages by fellow residents, creating a short piece within the two-day time limit. The choreographers do not realize their own packages but may interpret the prompts – for instance, use of certain music or props, or incorporation of certain movement phrase – in whatever way they wish. 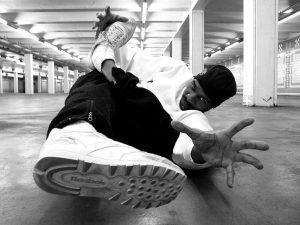 “48 Hours” places the artists firmly in the midst of confronting limits and risks in their artistic process. In the past, ideas explored in this season-starting exercise have developed into larger works later in the season.

Taking this exercise to Jeanne Ruddy Dance’s Performance Garage is an exciting venture for SHMD, after 30 years in our own studio. The goal for CP showings in the In Performance series is to provide a laboratory in which the choreographers can explore their ideas and interact with their audiences.

In Performance: 48 Hours, with works by the SHMD 2010-2011 Choreographers Project, runs Saturday, December 11, and Sunday, December 12, at 7:30 pm at the Performance Garage, 1515 Brandywine Street in Philadelphia.

A “talk-back” between artists and audiences follows the Saturday-night performance.﻿