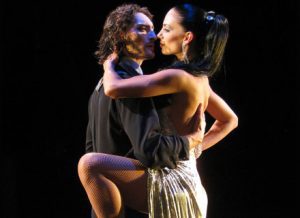 Created and directed by Luis Bravo, Forever Tango features 14 world-class dancers, a vocalist, and a 9-piece orchestra, anchored by the bandoneón, the accordion-like instrument that is the mainstay of tango music. The Forever Tango orchestra boasts four of only 200 bandoneón players known worldwide. Through music, dance and vignettes, the production traces the tango’s colorful history, from its beginnings in turn-of-the-century Buenos Aires bordellos to its acceptance into high society. Male dancers move in sleek black tuxedos with matching ties, fedoras and shiny black shoes, and female dancers dressed in stunning cocktail dresses, high heels and fishnet stockings seductively embrace, dip and lunge at lightning speeds. The dances, performed to original and traditional music, are the result of collaboration between each couple and director/creator Bravo. Called a “must see” production according to the New York Times and described as “a sensuous, seductive, pleasure” by USA TODAY, Forever Tango is the most successful theatrical dance show in history and has been seen by over six million people worldwide. According to Bravo, “tango represents so much more than just a dance: it is a music, a culture, a way of life.”

Forever Tango debuted in San Francisco in 1994 where it played for an unprecedented 92 weeks. The production opened on Broadway in 1997 for what was originally planed as a eight-week limited engagement that Dance Celebration presents Luis Bravo’s Forever Tango into a fourteen month run that received multiple Tony® and Drama Desk Award nominations. Since then, the show has toured internationally and returned to Broadway on two separate occasions.

Under the artistic direction of Randy Swartz, Dance Celebration maintains its tradition of bringing Philadelphia audiences the world’s best contemporary touring dance companies. This season, Superstars of Dance, Today and Tomorrow, pays homage to the great masters of dance while exploring new voices who challenge the status quo and reflect the style, taste and beat of the 21st century. Notes Mr. Swartz about Forever Tango, “Luis Bravo took Tango from the clubs and brothels of Argentina to the bright lights of Broadway, forever changing the art of dance. A true dance pioneer, he helped create a cult following for this Latin dance style. Forever Tango represents the best of the best in Argentine music and dance.”

Significant funding for the 2010-11 Dance Celebration season is provided by the William Penn Foundation and also in part by The Connelly Foundation, Samuel S. Fels Fund, Friends of Dance (Affiliates), Mid Atlantic Arts Foundation, Pennsylvania Council on the Arts, The Philadelphia Cultural Fund, and the Virginia C. Mulconroy Fund of The Philadelphia Foundation.

Dance Celebration
Founded by Artistic Director Randy Swartz, Dance Celebration is the Greater Philadelphia region’s major contemporary dance series and a nationally-recognized leader in its field. For the past 28 seasons, Dance Celebration has been a collaboration between Dance Affiliates and Annenberg Center for the Performing Arts. The 2010/11 season, titled “Superstars of Dance, Today and Tomorrow,” juxtaposes blockbuster dance companies with hot, new talent emerging on the dance scene.