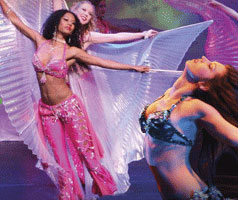 The mystic beats of Bombay meet the shaking hips of Cairo at the Keswick Theatre on Thurs., Nov. 18 at 8 PM as the Bellydance Superstars present “Bombay Bellywood”. The show’s new music draws heavily on mysterious Indian music and instrumentation, much of it by the troupe’s drummer Issam Houshan and the Pakistani-rooted Shabaz, with plenty of evocative vocals and contemporary industrial and electronic dance music touches.

With 6 years of performing over 700 shows in 22 countries, the BDSS have earned the accolade given them by the Sunday Times of England “the most important dance troupe in the world.”  In 2010, the BDSS added China and Japan to their touring, and now belly dance is exploding in those regions as the single fastest growing dance form.   This follows their 2009 PBS Special, “Live in Paris”  and European Tour and precedes their upcoming “Babelesque: Live From Japan”.

Meanwhile, the tribal style which first originated in San Francisco as a unique American interpretation of the art form with other ethnic additions was little known outside the country until the BDSS began extensive international touring.  Now tribal is everywhere, driven almost entirely by the BDSS profile. They’ve taken an ancient art form and turned it into a show similar to Riverdance – adding to the perception of bellydance much as Cirque de Soleil has added to the perception circus.  The BDSS has also inadvertently ended up as cultural ambassadors between East and West while providing bellydancers with a the confidence that their art now presents them with the opportunity to dance in the world’s most prestigious venues.

Per Moira Chappell, BDSS member in an interview in Access Atlanta before their show there recently, “It’s been a man’s world for a long, long time, and there are all kinds of glass ceilings that make women feel they have to put on business suits and compete in a very square world full of square things they’ve been trying to negotiate for a long time. Women’s brains don’t work that way. Belly dancing is decidedly a woman’s dance, so bringing it to the public sphere gives women a chance to be women in a place of power.”

The Bellydance Superstars are not elitists, and proud of it. Miles Copeland, founder comments, “The BDSS organization continues to build relationships within the bellydance community itself through such projects as our Raqs events as we feel there should be a symbiotic relationship of inclusion as much as possible if we are all to see bellydance achieve the status it deserves and create ever more opportunities for dancers to dedicate their passion to this art.”