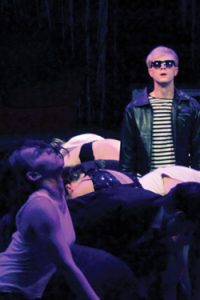 Following sold out shows in Lancaster County, Rev9 Dance and Performance Company brings FACTORY to Philadelphia audiences during the Philly Fringe Festival this September.  A visually compelling glimpse into the world of Andy Warhol, FACTORY boasts twenty performers who synthesize dance, acrobatics, aerial work, and multimedia to create an awe-inspiring production. FACTORY makes its Philadelphia debut September 4 at the St. Stephen’s Theater, home of Lantern Theater Company, with shows at 4 pm and 8 pm.

In Andy Warhol’s words, “Art is what you can get away with,” and Rev9 holds nothing back in this audacious production.  Delving into the lives of Warhol’s “superstars,” FACTORY lives out Warhol’s scene on stage, rather than simply telling the story. Using movement and media to express the Pennsylvania native’s rise to fame, FACTORY brings its audience into the glamorous world of art, sex, and drugs that was the Pop Art scene of the 1960s.

Directors Kristin Pontz, graduate of New York University’s Tisch School of the Arts, and Heather Bare, graduate of University of the Arts, are proud to bring this cutting edge production to Philadelphia.  Bare, a veteran Philadelphia performer, says, “Philly Fringe provides the perfect avenue for shows like FACTORY to reach a wider audience just as Warhol brought the underground scene into the public eye.”

With all of its aspects, FACTORY is sure to impress, whether for its compelling story, energizing music, or sheer physicality.  Lancaster Newspapers says, “Factory serves as a reminder of an artist and a movement that’s still inspiring young people to this day.”  Others have called it “eye-opening” and “inspiring.” In true Philly Fringe fashion, FACTORY will appeal to everyone from artists to the curious passersby.

FACTORY comes to the St. Stephen’s Theater, home of Lantern Theater Company, Saturday, September 4 at 4 PM and 8 PM. Tickets are $18.  This show contains some strong language and mature content. For tickets, contact the Festival Box Office at (215) 413-1318 or visit www.livearts-fringe.org.