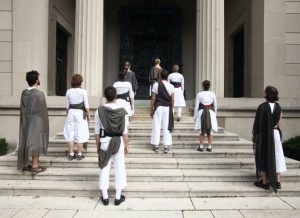 City Dances Parkway II is an interactive walking tour of public art sites led by Group Motion Dance Company, May 6-9, 2010. Presented by PNC Arts Alive, it incorporates contemporary dance and music with the sculptures along the east end of the Benjamin Franklin Parkway.

By creating a site-specific performance piece that utilizes iPods and speakers attached to the dancers’ bodies to create “moving music,” Group Motion has developed a unique multi-disciplinary work of art that opens a dialogue between contemporary dance and music with five public sculptures from 1964 – 1974 on the Parkway. 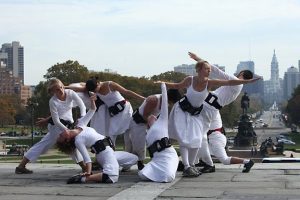 Starting at the Northeast corner of 17th Street, the performance visits the following sites
in this order:

Manfred Fischbeck, Artistic Director of Group Motion, has suggested a set of themes to the dancers, choreographers and composers for this performance. Derived from the five sculptural sites of abstract art that are explored by the performance, these themes are: suspension, balance, vision, remembrance and connection.

Throughout the tour, the dancers and the music will engage in a dialogue with each sculptural site; not to illustrate or interpret but to reflect and interact with them in a way the artist responds.

They invite audiences to experience this interaction from their own perception and to
respond by writing on Group Motion’s blog. 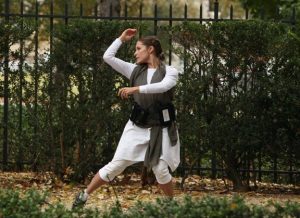 Group Motion Dance Company began as a contemporary modern dance company, pioneering the art form of multi-media dance theater. Originally founded in 1962 as Gruppe Motion Berlin, a chamber dance company evolving from the Mary Wigman School of Dance, the company performed throughout Germany and Europe, being one of very few modern dance companies in Germany at the time. In 1968, under the direction of Brigitta Hermann, Helmut Gottschild, and Manfred Fischbeck, the company relocated to Philadelphia and quickly received critical recognition, making historic appearances at Judson Church in New York in 1968 and Jacob’s Pillow Dance Festival in 1969, and by joining the National Endowment for the Arts touring program in the 1970s. Group Motion came under the sole artistic direction of Manfred Fischbeck in 1989 and has been consistently committed to the teaching and presentation of dance and interdisciplinary art forms, and to providing performance opportunities for local, national, and international artists.

Group Motion is one of Philadelphia’s longest running contemporary dance organization and is a locally, nationally and internationally-respected dance company. Artistic Director Manfred Fischbeck brings to Group Motion over 40 years of experience choreographing, directing, performing, and touring, both in the United States and abroad. The company holds its place in the forefront of contemporary dance and dance theater for four decades, creating a substantial body of over 50 works. Group Motion also has a long history of collaboration with prominent international artists, dancers, and choreographers, including Carol Brown (London), Kenshi Nohmi and Akiko Kitamura (Japan), Oscar Aruiz (Argentina), Wally Cardona (NYC) and Philadelphia locals such as Rennie Harris and Kun Yang Lin. The company began a world-wide touring program in the mid- 1990’s and has since taken its repertory to France, Argentina, Japan, Cyprus, Taiwan, and Poland, as well as to venues throughout the United States. Our work has been recognized by funding from organizations such as The Pew Charitable Trusts’ competitive Dance Advance program and the Pennsylvania Council on the Arts. In recent years, we have been selected to participate in the Philadelphia Fringe and Live Arts Festivals, the Wilma Theater’s DanceBoom! Festival, the Kimmel Center’s Fresh Ink Series, as well as many other dance festivals around the world such as Japan, Poland, Germany and Lithuania.