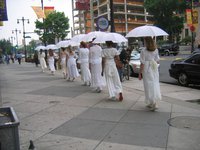 2010 marks the 10th Anniversary of the Anne -Marie Mulgrew and Dancers Co. (AMM & DCO’s signature site-specific dance-video work, Dances for Imaginary Places AKA The Umbrella Dance.  This work for 8-10 female performers in white carrying white umbrellas accompanied by a live videographer salutes National Dance Week with free outside performances on Wednesday, April 28 at 6pm and Friday, April 30 at 6pm. The performance begins at 20th & the Parkway traveling to the Art Museum steps ending at the Azalea Garden. For information contact: 215-462-7720, ammdco2000@att.net or www.annemariemulgrewdancersco.org.

Conceived and choreographed by Artistic Director/Founder, Anne-Marie Mulgrew, this 70-minute work is re-imagined for each site. It is built on a walking score accented with movement tableaus, intimate gestures and short choreographed phrases.  Viewers are invited to follow the troupe, dress comfortably and take photographs or video.  CityPaper has noted it is “Wonderful street art,”  “Be patient and observant, it’s quiet fun.”

The cast features Ms. Mulgrew and veteran community dancers:  Jacqui Bowman, Eiko Fan, Sally Forester, Shari Kornelly, Nani Manion, Jen Prydybasz, among others. It travels slowly and silently through an area bringing attention to the natural beauty of the environment and architectural landmarks. For the April 2010 performance, the all-female cast returns to the site of its first performance in April 2000. Is it a procession, parade, protest, film or dream?  The Umbrella Dance aspires to make unsuspected viewers who stumble upon the activity pause, reflect and remember. By interacting with the historic sites and nature, one’s sense of space and time and past and present merge. Spectators are invited to make their own interpretations and follow the troupe through the area.  Ms. Mulgrew notes, “The piece continues to morph, develop and grow informed by the environment, the performers input and passerby reactions.”