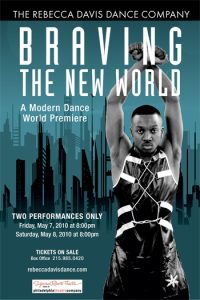 As Americans face the possibility of airport staff looking straight through our clothes, debate the extent of government control in our financial and healthcare institutions, and surrender our privacy to an enveloping online world, classics like “Brave New World” and “1984” have never been more relevant. In the world premiere of its contemporary ballet Braving the New World, based on the imagined worlds of authors like Aldous Huxley and George Orwell, the Rebecca Davis Dance Company explores these issues of societal control vs. individual freedom. Marking the company’s first performance at the Suzanne Roberts Theatre, this new ballet will be performed on May 7th and 8th, 2010, with tickets now on sale.

Braving the New World is performed in the same acclaimed style as last season’s GREED: The Tale of Enron. Critics called GREED “powerfully innovative” and “incredibly beautiful, celebratory, and powerful,” and audiences quickly realized that no-one in Philadelphia uses narrative dance the way Rebecca Davis does. With that same passion and force, Davis’s new ballet brings a totalitarian future to the stage, asking “Do we have the ability to escape overwhelming forces that could determine a chilling human future?”

In the ballet’s fictional future world, one which seems more and more plausible, human beings are not born, but grown to conform in every way to a destiny that has already been engineered by an omnipresent “Big Brother.” When one man refuses to surrender his individuality and emotions, what can he do to rescue a true human connection and find real freedom? This is the dilemma that Artistic Director and Choreographer Rebecca Davis strives to show on stage: “There is only one individual that emerges from the mass population, one person who fights against the establishment and the pressures of conformity.”

Braving the New World also marks the last Rebecca Davis Dance Company world premiere to be performed in Philadelphia this season and next. The company has experienced amazing growth since its first production four years ago, but next year, it will restructure and pursue touring opportunities throughout Pennsylvania, New York and New Jersey, as well as overseas projects through Rebecca Davis’ ongoing work in Bosnia and Rwanda. The company’s future in Philadelphia is yet to be determined, but the performers of Braving the New World are pleased to share their best work yet in Philadelphia with such an ambitious, timely premiere.

Philadelphia theatre patrons may expect the unexpected when it comes to discovering which stories choreographer and entrepreneur Rebecca Davis will bring to the stage, but those who have followed the Rebecca Davis Dance Company into its fourth successful season know they’re watching the blossoming career of one of the industry’s most dynamic and creative companies. Braving the New World, premiering at the Suzanne Roberts Theatre on May 7th and 8th, 2010, promises to deliver both the visceral thrill and thought-provoking ideas that Rebecca Davis’ audiences have grown to count on.

WHAT: The world premiere of The Rebecca Davis Dance Company’s Braving the New World, an original dance piece evoking the clash of conformity and human individuality, inspired by literary classics like “Brave New World”, “1984”, and “Fahrenheit 451.”

WHEN: Press opening 8pm on Friday, May 7th with additional performance at 8pm on Saturday, May 8th.