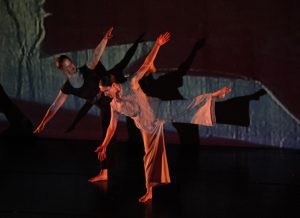 Guest choreographer, Brian Sanders and his company, JUNK, will present a short excerpt from their upcoming Live Arts Festival project premiering this Fall 2010. In this sneak peak of his work in progress, Sanders uses 80s pop music such as Duran Duran, Wham! and Yaz. He describes it as making “for a bunch of soaring, yet twisted knots of flesh.”

In “Stasis,” choreographer John Luna combines video projection and movement to capture the idea of a holographic woman that has been shattered into pieces. Leanne Grieger performs to music by Jacaszek, Dntel, and Burial.

Sara Yassky and Gregory Holt explore the realms of communication that are slow to unfold in their piece “Say No More,” in which they both choreograph and perform. “It’s like time-released Ritalin,” explains Yassky. “It will digest over time.”

“And so we are singing!” is a fun, new work choreographed and performed by Shannon Murphy and Jumatatu Poe with music by The Smurfs, Steve Surgalski, Port O Brien, and Power Animal. “and so we are singing” is the result of the exploration, and inspiration of the Calcaneus (heel bone), where the dancers slide out under pressure and spiral up and in to rise, over and over again. Join Jumatatu Poe and Shannon Murphy for this virtuosic investigation of a bone rhythm, its metaphors, and the heel’s ability to store beliefs, memories, and emotions. Shannon is a level two certified Franklin Method teacher, which she applied as a platform for the process of this piece. Shannon and Jumatatu are taking the actual movement of the Calcaneus, and exploiting it through dance…and so we are singing! 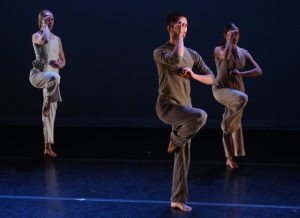 ABOUT GROUP MOTION
Group Motion Dance Company began as a contemporary dance company, pioneering the art form of multi-media dance theater. Originally founded in 1962 as Gruppe Motion Berlin, a chamber dance company evolving from the Mary Wigman School of Dance, the company performed throughout Germany and Europe, being one of very few modern dance companies in Germany at the time. In 1968, under the direction of Brigitta Hermann, Helmut Gottschild, and Manfred Fischbeck, the company relocated to Philadelphia and quickly received critical recognition, making historic appearances at Judson Church in New York in 1968 and Jacob’s Pillow Dance Festival in 1969, and by joining the National Endowment for the Arts touring program in the 1970s. Group Motion came under the sole artistic direction of Manfred Fischbeck in 1989 and has been consistently committed to the teaching and presentation of dance and interdisciplinary art forms, and to providing performance opportunities for local, national, and international artists.

Group Motion is one of Philadelphia’s longest running contemporary dance organization and is a locally, nationally and internationally-respected dance company. Artistic Director Manfred Fischbeck brings to Group Motion over 40 years of experience choreographing, directing, performing, and touring, both in the United States and abroad. The company holds its place in the forefront of contemporary dance and dance theater for four decades, creating a substantial body of over 50 works. Group Motion also has a long history of collaboration with prominent international artists, dancers, and choreographers, including Carol Brown (London), Kenshi Nohmi and Akiko Kitamura (Japan), Oscar Aruiz (Argentina), Wally Cardona (NYC) and Philadelphia locals such as Rennie Harris and Kun Yang Lin. The company began a world-wide touring program in the mid-1990’s and has since taken its repertory to France, Argentina, Japan, Cyprus, Taiwan, and Poland, as well as to venues throughout the United States. Our work has been recognized by funding from organizations such as The Pew Charitable Trusts’ competitive Dance Advance program and the Pennsylvania Council on the Arts. In recent years, we have been selected to participate in the Philadelphia Fringe and Live Arts Festivals, the Wilma Theater’s DanceBoom! Festival, the Kimmel Center’s Fresh Ink Series, as well as many other dance festivals around the world such as Japan, Poland, Germany and Lithuania.