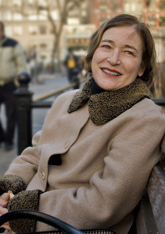 Since ancient times, people have believed in the connection between artistic genius and eccentricity, irrationality, and even insanity. The “mad genius” formula has been especially prevalent in discussions of dance. New Yorker critic Joan Acocella examines the history of this convention in dance criticism and assesses its value in a lecture on the great dancer/choreographer Vaslav Nijinsky.

Cultural critic, author, and essayist Joan Acocella covers dance and the arts for The New Yorker. Her writing also appears regularly in The New York Review of Books.

She has published several books on dance, literature, and psychology, including Twenty-eight Artists and Two Saints, a 2007 finalist for the National Book Critics Circle Awards; the critical biography Mark Morris; Creating Hysteria: Women and Multiple Personality Disorder; and Willa Cather and the Politics of Criticism. Among the works she has edited is The Diary of Vaslav Nijinsky, the first complete edition in English, and André Levinson on Dance (with Lynn Garafola).

Acocella received her BA in English from the University of California, Berkeley, and her PhD in comparative literature from Rutgers University. She received a Guggenheim Fellowship in 1993.