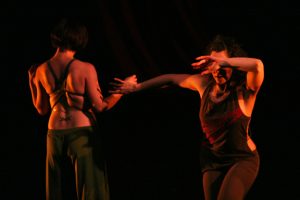 By Bill Hebert for the Dance Journal

On Saturday, February 6th at 7:30 Winged Woman Dance will perform their piece titled Residue as part of the Annenberg’s “By Local” series. Winged Woman Dance is a Philadelphia based ensemble founded by Tina Heuges Bracciale, that is dedicated to in-depth collaborations between visual artists, musicians and dancers.

Bill: Tina, when did Winged Woman Dance begin and where did the name come from?

Tina: The name comes from the sculpture on the west side of 19th street right outside Rittenhouse Square Park by artist- Arlene Love.  When I was in college for my undergrad I used to sit in front of that sculpture which at the time was surrounded by small rocks and I would fold these small pieces of paper with thoughts, wishes and demands. I assumed she would take care of these requests. I was horrified one day to walk over and see that all of the rocks were gone and replaced by a beautiful flower bed. I wondered if the gardeners were like “What the heck are all these little notes?”  I guess the formation of the collective officially formed as I was working on my master’s thesis at Temple.

Bill: How did you become part of the By Local series?

Tina: I had spoken to Madison Cairo about almost a year before and was casually telling her about this piece and how I sometimes feel that because I do not want to commit to doing dance as my full time gig that the dance community does not take me seriously.  Plus I really wanted to be a part of the series so that I could perform in a space that I have never danced in.

Bill: Tell us about “Residue”, the piece you will be performing.

Tina: I began this process by using human experiences that occur in our daily lives to initiate the movement along with scriptures from the Book of Psalms from the bible.  Allowing the personal life experiences of my dancers relating to fear and forgiveness to act as a motivator to the choreography process was challenging and exhilarating.   While working this way I kept pondering one question “What resides within us when we are separated or connected to God?”   That question helped to springboard the 4 sections you encounter in the evening length concert.  The show opens with a couple dealing with how to learn to be each other’s comforter. The second section explores the path of three women needing a new anchor to their life and finding it in the process of letting go.  This is followed by a duet about continuing to keep everything in your life complicated so that you do not have to deal with what is right in front of you.  And the closing section actually entitled “Residue” is a truly intimate look into deciding to remove restraints from your life so that you can truly be free to give love and receive love in a new way. 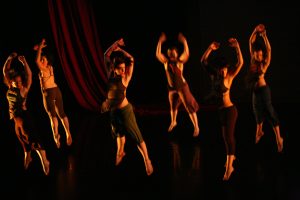 Bill: What drives you to make dances?

Bill: Tell us about the dancers who make up Winged Woman Dance and who will be performing in the piece?

Tina: My dancers (Adrianna Carey-Berzins, Adams Berzins, Christina Catanese, David Konyk, Briana Masson, Jaime Potts, Jeanine Shoemaker-Farr and Hedy Wyland)  are the most gracious and committed group of people working in Philadelphia! Some of them have been working on this project since its inception which was almost 2 years ago rehearsing for free.  They are my family. I would not be the choreographer I am today without them.

Bill: Is there one thing you hope audiences take away from this piece or your work?

Tina: This work is inspired by God taking up residence within me and what He has shared with me in the past year about love and forgiveness. I hope the audience will leave more spiritual open to let love truly in.

Bill Hebert (pronounced AY-BEAR), has been photographing performances in Philadelphia and New York for almost 8 years now primarily capturing dance. He has worked such local artists as Montazh, Rennie Harris Puremovement (RHPM), Headlong Dance Theater, BalletX, Winged Woman Dance/Tina Heuges, Nichole Canuso Dance Company and Group Motion among many others in Philadelphia. NY based and touring companies Bill has had the pleasure of working with include: Paul Taylor, Limon Dance, Parsons Dance, Doug Varone and Dancers, Merce Cunningham, RubberbandDance Group, Les Ballets Jazz de Montreal, River North Chicago Dance and Pilobolus. Bill has also had the pleasure of participating in three photography workshops with renowned dance photographer Lois Greenfield. Bill’s philosophy and mission is to “Capture the Essence of the Moment” and give the work a life beyond the stage. Bill Hebert is currently a photographer for The University of Pennsylvania’s Dance Celebration series, was one of the photographers for both the 2008 & 2009 Live Arts and Philly Fringe Festival, Choreographic Sketches in NY, 2010 IABD Conference and proud to be a part of the team for the “By Local” series in Philadelphia which will give local artists a chance to tell their story while doing what they love which is to entertain and enlighten others.