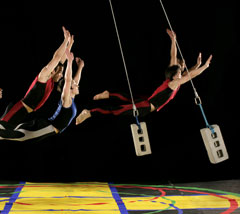 Daredevil Hollywood stunts, slam-dancing  and the heart-pumping thrills of a demolition derby are landmarks of STREB’s full-length Brave which makes its Philadelphia premiere February 4-6, 2010 on the Dance Celebration Series, Annenberg Center for the Performing Arts, 3680 Walnut Street, Philadelphia, PA.

Events such as “Walk Run Turn,” “Crash and Slide,” “Falling,” and “Artificial Gravity” demonstrate Streb’s movement investigation that challenges gravity and pushes the boundary for “pure movement.” Streb states, “My dancers and I see the rehearsal as a laboratory for testing scientific principles on the body. We invent action ideas which we think are archetypal, noticeable, and understandable.”  In Squirm, as eight dancers are compressed in a constructed set like sardines in a can, one dancer manages to escape head first through a slit. “Super Position,” the program closer, features the Espana’s Whizzling Gizmo, an amusement park wheel-shaped, towerlike structure with dancers inside, precariously balanced on top, and inside and around the edges. Brave is an exploration of circular motion.  In “Artificial Gravity, the dancers work with two circular devices going in opposite directions on a rotating stage. Video projections show a view of the dancers from above adding another perspective.  Throughout, the courageous actioneers (one of whom is Philadelphian Samantha Jakus) shout instructions such as “in-out,” and/ or code phrases such as “vanilla shake” and tuna melt.”

Originally called STREB/Ringside, the company was founded in 1985. Its high impact and high velocity performance pieces became popular with the experimental dance and cutting-edge of entertainment audiences. In 2003, Streb founded S.L.A.M. (STREB Lab for Action Mechanics) in Brooklyn, NY which is open to the public. She refers to her own choreography as “Pop Action” a fusion of dance, athletics, boxing, the circus and Hollywood stunt work based on daring and split second precision.  Streb notes,      “I question the rate, speed and all the invisible forces that cause movement to happen. Action is the message.”

In addition to performances, STREB will offer outreach activities including a master class as part of The Artist to Artist Series and a special school performances for The Student Discovery Series.  For more information call        215-636-9000 ext.110 or visit www.danceaffiliates.org.

This tour of STREB is made possible by a grant from Mid Atlantic Arts Foundation in partnership with the National Endowment for the Arts Regional Touring Program.

This presentation of STREB was made possible by the National Endowment for the Arts’ American Masterpieces Dance Initiative, administered by the New England Foundation for the Arts.