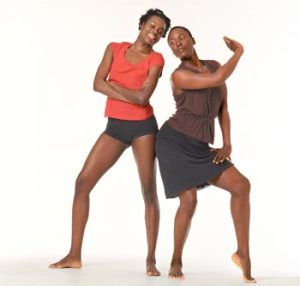 Resistance, memory, and love drive the centerpiece of a penetrating evening of dance at Bryn Mawr College this winter. Part of the 25th Anniversary of Bryn Mawr’s Performing Arts Series and the opening celebration of the newly renovated Goodhart Hall, the college is presenting a vibrant evening of works by Urban Bush Women with Germaine Acogny, the celebrated director of Compagnie Jant-Bi and her star dancer  Kaolack (Pape Ibrahima Ndiaya) on Saturday, February 13 at 8 p.m.

Urban Bush Women have been widely heralded for their electrifying performances. “Urban Bush Women are in a category of themselves. In fact, given the breadth and freedom of their art, they defy categorization.” said New York Newsday. Deborah Jowitt in The Village Voice wrote about the company, “Dancing can run through their bodies like warm honey, or like steel stiffening them for battle. Their expressive powers shake the theater.”

At the center of this exciting evening are two heralded works: the women’s section of Les écailles de la mémoire (The scales of memory) and Walking with Pearl…African Diaries. Both pieces showcase Urban Bush Women’s dedication to exploring the use of cultural expression as a catalyst for social change. Both works weave contemporary dance, music, and text with the history, culture, and spiritual traditions of African Americans and the African Diaspora, exploring the transformation of struggle and suffering into the bittersweet joy of survival. Les ecailles is a piercing movement treatise exploring the meeting of African and U.S. history. A renowned collaboration between Germaine Acogny, a legend in her native Senegal, and Jawole Willa Jo Zollar’s Urban Bush Women, the work is typically performed by, one all-female and based in the US and the other an all-male and based in Senegal. They will only perform the women’s section at Bryn Mawr.

Walking with Pearl…African Diaries was inspired by African American dance pioneer/social activist Pearl Primus. Primus played an important role in the presentation of African dance to American audiences. Early in her career she saw the need to promote African dance as an art form worthy of study and performance. Reacting to myths of savagery and the lack of knowledge about African people, Primus’ work was an effort to guide the Western world in viewing African dance as an important and dignified statement about another way of life. Primus was the first American choreographer to go to Africa, which she visited initially in 1948.   The piece was created based on her diaries of her travels.

To enhance the audience’s understanding of the performance, Bryn Mawr will host a post show panel discussion between Germaine Acogny and Jawole Willa Jo Zollar with renowned cultural historian Brenda Dixon-Gottschild.  Dixon-Gottschild has done extensive research on Urban Bush Women and followed the process of the making of Ecailles. She will compose the program essay on the piece. Dixon Gottschild has been instrumental in bringing to light the Africanist presence in European-based American concert dance. In addition to her scholarly work, Dixon Gottschild is a practicing choreographer and performer. She is the Philadelphia correspondent for Dance Magazine, where she writes features and reviews on a range of topics from the Pennsylvania Ballet to hip hop.

Given the cultural importance of these artists Bryn Mawr College’s Performing Arts Series is reaching out to the Philadelphia Dance Community and offering a master class with Acogny and Zollar. The class will run from 4-6 pm on Friday, February 12. Reservations can be made by calling 610-526-5210.

About Germaine Acogny and Compagnie Jant-Bi
Germaine Acogny dances, choreographs and teaches on all continents, and has become a true emissary of African Dance and Culture. Her work and personality are highly respected in Africa and worldwide. In 1995, she moved back to Senegal with the aim of creating an International Center for Traditional and Contemporary African Dances. In 2004, her dream was realized when she established the Ecole Des Sables, International Center for Traditional and Contemporary African Dances in Senegal, which is a place for professional education, a forum of exchange and a meeting place for dancers from Africa and across the world. She has been honored as “Pioneer Woman” by the Senegalese Ministry of the Family and the National Solidarity. Acogny has been bestowed with the Chevalier de l’Ordre du Mérite, Officier des Arts et des Lettres, and Chevalier de l’Ordre de la Légion d’Honneur of the French Republic. The Senegalese Republic has decorated her with the Chevalier de l’Ordre National du Lion and Officier des Arts et des Lettres. The African Magazine Jeune Afrique chose Acogny as part of the 100 personalities who “make” Africa. Compagnie Jant-Bi was founded in 1998 to develop and promote contemporary African dance and foster exchange among dancers from Africa, the Diaspora, and other world cultures.

About Urban Bush Women
Founded in 1984 by Jawole Willa Jo Zollar, Urban Bush Women is a performance ensemble dedicated to exploring the use of cultural expression as a catalyst for social change. UBW weaves contemporary dance, music, and text with the history, culture, and spiritual traditions of African Americans and the African Diaspora, exploring the transformation of struggle and suffering into the bittersweet joy of survival. Urban Bush Women (UBW) seeks to bring the untold and under-told histories and stories of disenfranchised people to light through dance. They do this from a woman-centered perspective, as members of the African Diaspora community, in order to create a more equitable balance of power in the dance world and beyond.

The presentation of Urban Bush Women with Germaine Acogny and Kaolack  is made possible by a grant from The Pew Center for Arts & Heritage through Dance Advance.

Tickets to the show are $18, $15 for senior citizens and free for Bryn Mawr, Haverford and Swarthmore students, faculty and staff. Tickets are $10 for students of other schools, and $5 for children 12 and under. Priority seating is available for $80 subscription packages ($65 packages for senior citizens). For more information and tickets call the Office for the Arts at 610-526-5210.