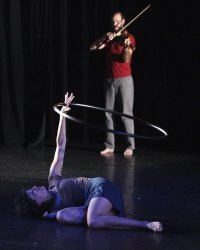 What happens when you  improvising musicians together with dance artists? You get an evening of risk-taking, genre-bending, and (mostly) never-seen-before dance and music creations.

If there’s a sub theme to the night, it is the length of time  that each duo has been collaborating. Some artists bring with them decades of experience, while others  are meeting, like a blind date, for the first time ever. Will the more historied duos thrive on intimate knowledge of each partner’s role, or will they flounder in cliché? Will the newest duos captivate us in their spontaneity or will they fracture from unforeseen incompatibility? Each duo will perform for about 15 minutes during the evening.

The duos being presented are…

LEAH STEIN – dance
TOSHI MAKIHARA – perucssion
Certainly among the most ubiquitous and celebrated of dance / music collaborations in the region, Leah and Toshi began collaborating 1987 with what Toshi refers to as the “cabbage piece”. They have since created an enourmous body of work, most notably with the Leah Stein Dance Company. Their work typically implores an inventive use of space, often exploring acoustic and architectural details, usually with a subtle sense of humor and playfulness. In performnace, both Leah and Toshi are extremely accustom to throwing of the limitations of their designated roles of “dancer” or “musician”, exchanging sound making and moving in a manner so rarely convincing.

EUN JUNG CHOI-GONZALEZ – dance
ALBAN BAILLY – guitar
Eun Jung, a native of Korea, and Alban, a native of France, both now living in Philadelphia, bring an interesting web of artistic and professional backgrounds to their collaborative work, which has included both choreographed / composed work and completely improvised pieces. Eun Jung’s sharp and quick movements, often inexplicably flat to the ground, rocketing up and then back down, collide with Alban’s acoustic guitar broken-gyspy jazz-like insertions to form a demented and almost flamenco-like peformance style that is at once energetic and passioned.

MELISA PUTZ – dance
JESEE KUDLER – electronics
Though these two artists have been orbiting each other for quite some time, this is the first opportunity they have had to work together. Melisa is most know for her work with PIMA Group, a group she co-founded with musicians Michael Barker and Thomas Clark. Jesse is active in Philadelphia as both a musician and an organizer (he has even presented PIMA Group in the past). He most often improvises on cheap consumer devices: a no-name electric guitar, hand-held cassette recorders, radios and transmitters, but will likely be doing something a bit different for this evening.

MICHELE TANTOCO – dance
CARLOS SANTIAGO – violin
The matching of this first time duo was all about personalities. After seeing Michele perform several times in recent months, her playful and idiosyncratic style, reminded us of Carlos Santiago and a duo he did with Melisa Putz back in 2007. Like the best of dance partners, Carlos has an amazing ability to connect with his partner during improvisation, at once leading and responding to the other person.

GABRIELLE REVLOCK – dance
JACOB MITAS – viola
It is notable that this is the sole collaboration on the evening that is choreographed and has been seen before (Indivisibility debuted at the 2009 Philadelphia Live Arts Festival as part of the A.W.A.R.D. show). And even though the piece is set, Gabrielle’s constant twirling of a huluhoop, and the constant awkwardness and vulnerablilty it creates, gives the piece a sense of danger and edginess that will feel very much akin to the precipice of the improvised duos.

MEG FOLEY – dance
ERIC CARBONARA – guitar
Meg says “I am a Philadelphia-based dance artist and director of Moving Parts. I intend Moving Parts to be a familial dance think tank with a group of steady collaborators exploring how art environments are made and trying to create elusive yet emotionally evocative performance experiences that straddle the fine line between focus and freedom. I am concerned with work that is both somatically oriented and precisely organized visually. And ultimately in my practice, I’m asking existential questions about the human experience of being, in relation to self and in relation to others. My work is grounded in the body, in the real, in the meaty stuff that I feel holds the stuff of being alive.”

Eric Carbonara is a Philadelphia based guitarist, whose search for raw aural expression has led him far and wide – from noise & electro-acoustic music to taking deep root in the bounty of the wooden guitar. Carbonara’s playing draws on the rich musical styles from Andalusian Roma-Flamenco to Hindustani & North African folk to form a kind of exalted pidgin style of playing that covers a wide emotional terrain from meditative calm to restless unease.

NICOLE BINDLER – dance
GENE COLEMAN – bass clarinet
Where most of dance artists make use of improvisation as an aspect of broader artistic explorations and choreography, Nicole has focused a majority of her career on exploring improvisation as a unique form, and has amassed a particularly celebrated roster of musical collaborators. Gene, on the other hand, is a composer who has focused on using elements of improvisation in his scores, often using them along side more exactly notated sections. In many ways, this duality, which is further amplified by the performers’ differing stage personas, is a most intriging exploration of polar opposites, and the ways in which these facets can magnify the creative potential of two individuals.