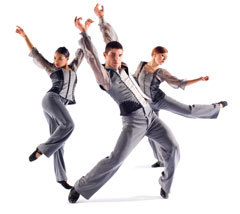 The program opens with Evolution of a Dream (2009), a full ensemble work, choreographed by Sherry Zunker to music by David Stewart and His Rock Fabulous Orchestra. This work celebrates the company’s 20th Anniversary and is a re-imagining of the Company’s classic signature piece “Reality of a Dreamer” which was produced and aired on public television. It garnered two Chicago Emmys prior to being picked up by PBS, launching the company’s national presence.

Frank Chaves’ riveting, colorful and richly-seductive Habaneras, The Music of Cuba (2005) closes the program. Set to the 1950 orchestral music of Cuba’s popular composers, Ernesto Lecuona, Carlos Puebla and Silvio Rodriguez, this six-part full-company work captures the aesthetics and spirit of Chaves’ early Cuban roots. Chaves’  other works include Sentir Em Nos (Even For Us) (2009), an evocative duet, performed by Michael Gross and Melanie Manale-Hortin, and Tuscan Rift (2009), a small ensemble work,  to music by Rene Aubry and Andrew Bird. The program also includes an excerpt from Battles’ innovative Train (2008) featuring a solo danced by Hanna Brictson to Les Tambours du Bronx and Haley’s rousing Uhuru (2009) (Swahili for freedom), another full-company work, to Akoya Afrobeat.

In addition to performances, RNCDC will offer outreach activities including a master class as part of The Artist to Artist Series and a special school performances for The Student Discovery Series.  For more information call 215-636-9000 ext.110 or visit www.danceaffiliates.org.

This tour of River North Chicago Dance Company is made possible by a grant from Mid Atlantic Arts Foundation in partnership with the National Endowment for the Arts Regional Touring Program.