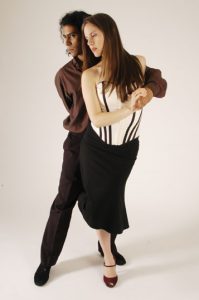 by Carolyn Merritt for The Dance Journal

The evening started off with the most basic of exercises.  Walking.  Two whole songs worth.  Circling the space in counter-clockwise rotations, we matched the downbeat of each step with an exaggerated snap, the kind pacing and undeniable compás of DiSarli’s Don Juan drilling the room into a fleeting moment of shared time.  It was a Monday night at Jerry Klein’s South Street Tango Studio, and the room was filled to capacity.  From 7:00-10:30pm, approximately 10 couples each were in attendance for the intermediate and advanced level tango classes hosted by Argentine wonder-kid, Andrés Amarilla.  The newest space in the city’s burgeoning tango community, Monday nights it is home to the newest faces on the scene, Amarilla and wife Meredith Klein. Settled in Philadelphia after 2 years of touring – during which they taught and performed in 30 cities on 4 continents – they have founded the Philadelphia Argentine Tango School, offering group and private lessons at both the South Street space and their renovated loft in the upper reaches of Fishtown.  Partners in life and dance since 2005, Amarilla and Klein have made a name for themselves on the international circuit as exquisite performers and methodical teachers of tango nuevo, or the new tango.  Though “new” is not an entirely apt descriptor for their relation to the city or the dance.  As for what it refers to in the dance, well, that’s a dissertation unto itself.

Klein is no stranger to Philadelphia.  She grew up in the leafy suburb of Narburth.  A classical pianist, Meredith first discovered Argentine tango while studying music theory at Amherst College.  While it was the music that initially grabbed her, she felt compelled to dance rather than to play tango.  Ten years later, she hasn’t stopped.

And her husband, Amarilla, is anything but new to tango.  An anomaly in the tango world, he began dancing more than twenty years ago, at the age of 11.  The tango had nearly entirely fallen out of practice in Buenos Aires, the city of its birth, by the time Andrés was born in the mid-1970s.  Still, like any deeply-rooted cultural tradition, vestiges remained.  In Andres’ case, the tango skipped a generation.  He recalls how, as a child, he saw his grandfather dance at family events, and he roots his affinity for the dance with the love he felt for his grandfather.  A single viewing of Juan Carlos Copes – international star of stage and screen and virtual ambassador of tango – performing on television sealed his fate.  Fascinated by the complexity, the speed and the expression on Copes’ face, he pestered his mother for tango lessons until she finally relented in 1987.

While the tango has undergone a minor renaissance of late, both at home and abroad, the percentage of porteños (residents of the port city of Buenos Aires) who dance it remains miniscule at best.  Moreover, the majority of young Argentines dancing tango have discovered it in recent years.  That’s what makes Amarilla such a gem. When we first met back in 2005, he told me he believed he was the only child dancing tango in Buenos Aires in 1987.  He then paused for a moment before declaring, “yes, I can sign on it.”  On paper, he could pass for twice his 32 years.  In a rare dance industry that reveres age – where skill, maturity and feeling are linked in artful marketing campaigns that target foreign desires to consume authenticity – Amarilla is the exception to the rule.

I recall that night we first met in a porteño dance hall, when he shuffled over and shyly asked to store his backpack beneath our table (to get a chance to talk with Klein, I would soon learn).  He nonchalantly informed me that he was among the 5 Argentines responsible for the birth of tango nuevo.  The others were household names to any serious tango dancer.  What’s more, they were older.  And this kid, well, he was just that – a kid.  I quickly wrote him off, convinced his comments were the youthful equivalent of the famed Argentine piropos, the hyperbolic pick-up lines the more mature male dancers whisper into the ears of their female partners on the dance floor.  Just as quickly, however, he proved me wrong.  Our evolving friendship has been a quiet reminder not to judge a book by its cover, a humbling lesson in the value of experience in this dance.

The tango’s comeback has been linked to a host of different events.  Many root its resurgence in the 1983 Paris premiere of the stage show Tango Argentino.  This account draws on the popular narrative of Argentina’s historic outward glance; for the tango emerged among lower-class residents in turn-of-the-century (that’s 20th) Río de la Plata society, and was only widely embraced at home following acceptance abroad, in the elite dance salons of early 1900s London, Paris and New York.  A somewhat lesser-known tale speaks to the dance’s enduring significance at home.  As Tango Argentino was debuting on the international stage circuit, Argentina was emerging from a brutal, 7-year military dictatorship and a “dirty war” that ravaged some 10,000-30,000 of its own citizens.  With the return of democracy, the government sought ways to encourage people to reclaim public space.  Thus it was that the Neighborhood Cultural Program was born in 1984, offering residents of the city of Buenos Aires access to free classes in everything from music to photography to theatre to tango.

It was in the classes of Gustavo Naveira, organized under the auspices of that government cultural program, that Amarilla was discovered in the mid-1980s.  The youngest member of Naveira’s performing company, he played a part in reintroducing audiences throughout the city to their cultural heritage.  By the age of 18, he had studied with and danced in the companies of a number of tango giants, including stage king Copes, and partnered the breathtaking Geraldine Rojas.  Following this intensive, 7-year training, Amarilla would return to his first teacher, participating in an ongoing series of investigation sessions hosted by Naveira and Fabian Salas in the mid- to late-1990s.  It was from these sessions that an entirely new way of conceptualizing and teaching Argentine tango emerged.

The goal of the sessions was an extensive analysis of the physical possibilities in tango.  A deconstruction project of sorts, they broke the dance down to its simplest elements in order to rebuild it anew.  They also sought to uncover the common practices in traditional tango – the most likely combinations of steps, the tendencies and tricks they fell back on in a pinch – the idea being that once they knew the rules, they could then break them.  The result was an era of unparalleled choreographic innovation, where new movement compositions were the product of an endless combination of possible permutations.

When Amarilla and Klein talk about tango nuevo, it is this – a new means of analyzing and teaching the structure of the dance – that they refer to.  Moreover, their approach is grounded in a profound understanding of the “traditional” in tango.  It is precisely because of his foundation in traditional tango that Amarilla is so well-equipped to help his students refine and expand their dance, as well as their understanding of the dance.  While many point to external factors as evidence of a “new tango” – the proliferation of bell-bottoms and dreadlocks, wild moves and flying limbs, electronic and non-tango music – Amarilla and Klein provide an education in the fundamental principles of the dance, principles that will serve the dancer regardless of age, style of dance, dress, music, etc.

Back in the Monday night class, we continue walking, with each song adding a new adorno, or embellishment.  At times as simple as a beating of the foot across the ankle, a sliding impulse along the floor before extending into the step, embellishments are multi-purpose tools.  Aesthetic elements that render the walk more elegant, exercises that help the dancer locate and comment upon half and quarter time beats, actions that reinforce the essentials of dance, from posture to balance to the proper rotation and placement of the leg.  Embellishments bring to the fore the art and complexity of walking – the root from which everything else emerges in the tango, and the skill a tango dancer spends a lifetime perfecting.  That is why, despite their nuevo bent, Amarilla and Klein will constantly return to the walk, even in their intermediate and advanced level classes.  In Argentine tango, the path to complexity begins with a few simple steps.

This is also part of the appeal of the tango – its accessibility.  While the word tends to conjure images of passion and drama, the essence of the dance is little more than walking in someone else’s arms.  Indeed, tango communities the world over are remarkable for their intergenerational character.  In Philadelphia, practitioners range from late teens all the way up to mid-70s.  A dance that offers something for everybody, the practice of tango can be a lifelong one.

For more information on the Philadelphia Argentine Tango School, see www.philadelphiatangoschool.com or contact Meredith Klein at meredithklein at gmail.com.

The South Street Tango Studio is located at 1527 South St (www.southstreettango.com).  For a complete calendar of tango events in the region, see www.tangophiladelphia.com.

Carolyn Merritt is an anthropologist and dancer.  She is currently revising her dissertation, a study of the cultural politics of Argentine tango.