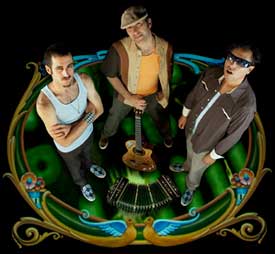 Otros Aires, Argentina’s premiere electronic tango band, will bring their signature blend of tango and electronica to the Philadelphia Ethical Society on July 8, 2009.

The 8:30pm concert will be preceded by a 7pm beginner tango lesson. There will be ample space for dancing (and chairs for listening) and a performance by Andrés Amarilla and Meredith Klein.

The band will also offer a musicality workshop for tango dancers, musicians and enthusiasts, Understanding Tango from the Golden Age to Piazzolla, at the Philadelphia Ethical Society on July 7 from 7:30-10pm, followed by a guided práctica (practice).

The Otros Aires events in Philadelphia are co-sponsored by Tango 411, a Media-based tango studio, and the Philadelphia Argentine Tango School, offering tango classes in Center City.

An “archaeological-electronic project,” Otros Aires mines the annals of the music’s history to create a sound that is 90% tango and 10% electronic.  Blending samples from some of the earliest tangos with contemporary lyrics and electronic beats, they create a modern day music that maintains the feeling and spirit of traditional tango.  Visual images form the backdrop of the band’s concerts, hailed as “one of the most unique and compelling audiovisual live shows in contemporary global fusion.”

The brainchild of singer/guitarist Miguel DiGenova, Otros Aires began as a fusion musical project in Barcelona in 2003.  In 2004, DiGenova returned to his native Argentina with a new group of musicians and a new sound (featuring guitar, piano, bandoneon and percussion), where they recorded their first CD, Otros Aires.

They made their Argentine premiere on National Tango Day (December 11, 2004) at the Carlos Gardel House, the museum dedicated to the mythical singer. In the spirit of mestizaje (intercultural mixing), their music unites influences including Gardel’s timeless voice, traditional Argentine culture, the tango’s Golden Era orchestras, the milonga (fast-paced cousin of the tango), the sounds of Buenos Aires’ old neighborhoods, and contemporary electronic rhythms.

Since their debut, Otros Aires has been a regular guest in the milongas (tango dance halls) of Buenos Aires, and they have been invited to perform at countless tango festivals, in museums, and for major radio and television stations in the Argentine capital.  Since 2006, they have been regulars on the European tour circuit, and they made their American premiere in 2008.  Their much-anticipated second disc, Dos, was released to critical acclaim in 2007.

Otros Aires arrives in the U.S. on the heels of a 13-city European tour.  In addition to Philadelphia, they will make stops in Chicago and in New York City for the Lincoln Center Midsummer Night Swing Series.

For More Information & To Purchase Tickets: www.otrosairesinphiladelphia.com or 610-864-2323.