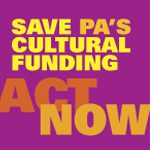 This just in from the Greater Philadelphia Cultural Alliance…

Yesterday, Governor Rendell put the next plan into play regarding a solution for closing the state’s ballooning deficit and the FY10 state budget.

So where do we go next? In a seemingly neverending back-and-forth process, it’s now back on the House to review this proposal. In an article released by Harrisburg’s Patriot-News, the Governor revealed that if he had to he would work through Labor Day to reach a sound budget agreement.

In the meantime, widespread support of arts and cultural funding is still critical. We are still dangerously close to the chopping block, and as we’ve learned over the course of the past month, we can’t make predictions or rest on our laurels, and hope for the best. Drastic options are still on the table. The more that the Governor’s office and state legislators hear from us, the more they cannot ignore the importance and vitality of the sector.

If you have already sent a letter to the Governor – great! Send it along to five friends, family members, or colleagues. Issue a call to action on your mailing list, including our campaign letter link. Stick one of our colorful buttons on your website or blog: http://philaculture.org/action/web-stickers – where
visitors can click and get sent right to the online campaign! If you have not written a letter to the Governor, we urge you to do so. Two minutes or less to send a letter is a small investment in free after school art programs for youth, a museum exhibit, or a community theater. We’ve worked too hard to give up the fight and get complacent.