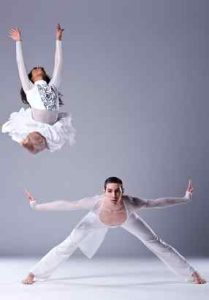 By Merilyn Jackson, For The Inquirer

Philadelphia hosts a redoubtable legion of dance-makers. Over the weekend, amid a swirl of other dance activity, Eleone Dance Theatre was onstage at North Broad Street’s Freedom Theater, while across town the Painted Bride hosted Tania Isaac, Gabri Christa, and Marianela Boan.

At 4 p.m. on Saturday and Sunday, Eleone held forth in the beautifully refurbished John E. Allen Jr. Theater (there’s free, attended parking next door). With the early curtain, you could take in Eleone and still make it down to South Broad Street to catch one of the other big dance concerts.

This is relevant because two pieces on Eleone’s program were by former Philadanco dancers Gary Jeter and Tommy Waheed Evans. Evans made it to his alma mater’s smash show Saturday night. And Koresh dancer Kyle McHargh, who also had a piece on Eleone’s program, managed to run downtown both nights to appear in the pristinely danced Koresh show.