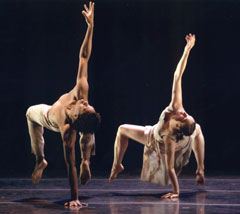 National Dance Company of Spain 2 (NDCS2), performs an all-Nacho Duato program, May 14-16, Annenberg Center for the Performing Arts, 3680 Walnut Street, Philadelphia, PA.  The company is under the artistic direction of superstar choreographer Nacho Duato, “an artist of exceptional skill merging old and new to make a dance language of his own.”  (Sydney Morning Herald)

The program features three of Duato’s masterpieces: Duende (1991) to Claude Debussy’s music, Without Words (1998) to Franz Schubert’s song cycle, and Gnawa (2005) set to a score of Moroccan and North African sounds. Known for its fluid musicality, effortless technical virtuosity and breathtaking expressiveness, this troupe of 14 superbly-trained 17-23 year old dancers is “absolutely must not be missed, due to the elegance of the compositions and the talent of the young performers.” (Il Messaggero)

Duende premiered on the Nederlands Dans Theater. It consists of stunning sculpturally-complex duets and trios. Duendo reflects Duato’s signature vocabulary of 180 degree inversions, flexed feet, intricate yet seamless partnerings and lifts and soaring extensions and jumps. Female dancers in short dresses and bare-chested men in pants, designed by Susan Unger, move through Walter Nobbe’s minimal set.   Duato’s choreographic ideas are inspired by Debussy’s music in which he visualizes shapes, not people or relationships. “Turning ideas into a visual art form is Duato’s goal.” (Expression Magazine).  Without Words, a full company work, made its world premiere on The American Ballet Theater. The title refers to Schubert’s song scores of instrumental music.  Duato’s set and costumes highlight the dancers’ exquisite physiques, free of any romantic atmosphere. The work explores the subject of life and death through two central figures in a vital universal cycle. Duato notes, “I always visualize the dance first before I start working on the dancers.”

Born in Valencia, Spain, Nacho Duato began his professional ballet training at the Rambert School in London, Maurice Béjart’s Mudra School in Brussels and completed his dance education at The Alvin Ailey American Dance Center in New York City.  Duato signed his first professional contract with the Cullberg Ballet in Stockholm in 1980 and a year later Jirí Kylián brought him to the Nederlands Dans Theater. In recognition of his achievement as a dancer, Duato received the Golden Dance Award in Schouwburgen, Netherlands in 1987. His first choreography, Jardí Tancat, won him the first prize at the International Choreographic Workshop in Cologne. In 1988, Nacho Duato was named Resident Choreographer for Nederlands Dans Theater alongside Hans van Manen and Jirí Kylián. Nacho Duato has been the Artistic Director of Compañía Nacional de Danza since June of 1990. In 1995, he received the title of Chevalier dans l’Ordre des Arts et des Lettres, presented annually by the French Embassy in Spain. The Spanish Government awarded him the Golden Medal for Merit in the Fine Arts in 1998. He won the Benois de la Danse at the Stuttgart Opera, one of the most prestigious international awards for choreography, presented by the International Dance Association for Multiplicity. Forms of Silence and Emptiness in April of 2000. In 2003, Duato became the winner of Spain’s National Dance Award, in the Creative Category.

In addition to the performances, the company will conduct a free master class, Friday, May 15 at 1pm and Student Discovery Series Performance for Schools Friday, May 15 at 10:30 am. For Dance Celebration Outreach information, contact Dance Affiliates 215-636-9000 ext.110 or visit www.danceaffiliates.org