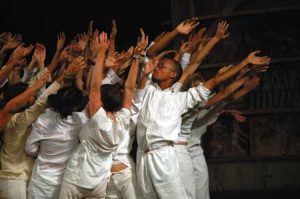 THE BREAD & PUPPET THEATER returns to Philadelphia as The Lubberland National Dance Company in “27 Dirt-Cheap Dances,” a topical play for these trying times of economic crisis. Bread & Puppet’s itinerant Lubberlanders will enact problem-solving dances for our problems, collateral damage dances for victims, victory dances for victories, wedding dances for hostile populations and their rulers, funeral dances in response to the most recent wars of Lubberland, and total peace and harmony dances with no meaning whatsoever. Karl Marx makes a cameo appearance to duke it out with Uncle Money, and yeah, there will be giant puppets, the notorious Cheap Art Store, and maybe even some sourdough bread after the show.

WHY A DANCE COMPANY? In the 1950s Peter Schumann, Bread & Puppet’s founder, moved from Germany to New York to work with Merce Cunningham’s modern dance troupe. Schumann was both a choreographer and a sculptor with an interest in reviving the avant-garde and folkloric arts that had been diminished in the Second World War. The merging of these forms laid the foundations for the Bread & Puppet Theater, whose puppets can be considered “choreographed sculpture” steeped in a tradition of experimental rusticism. After over 40 years of being known for his puppetry, Schumann has returned to his roots by forming The Lubberland Dance Company with a mixed group of dancers and non-dancers. So far the Lubberland Dances have only been seen in Vermont and New York City. This tour will bring more people to see—and to perform as—Lubberland Dancers in cities and towns around North America.

Bread & Puppet’s Cheap Art for sale after the show!