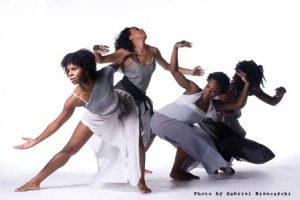 Out of the disarray of the Antebellum South shuffled that “venerable old darkey,” Uncle Remus – a slave caricature created by white folklorist Joel Chandler Harris in 1879 and revitalized by Walt Disney in 1946. With a G-rated grin and a song of “zip-a-dee-doo-dah,” Uncle Remus cheerily whitewashed a rich, raucous oral tradition of Southern storytelling with roots in both Native American and African culture.

Now, actor/writer Troy Dwyer, and choreographer/storyteller Charles O. Anderson re-imagine the mythology of Uncle Remus’s origin by spinning a twisted tale of his forgotten foil – the magical and mysterious queen of crows, Aunt Eloe, who will be played by Philadelphia’s queen of spoken word poetry, Ursula Rucker. With a fusion of dance and theatre, Caw conjures an eccentric pantheon of unforgettable characters-in-motion in an explosive piece of Physical Theatre. Guest artists also include members of Anderson’s Philadelphia company, dance theatre x and Holly Cate, guest Equity Artist.

Caw tells a mythological story stretching from the contemporary United States into magical realms of ancient gods and goddesses through a pantheon of vivid characters that are real people, deities, spirits, animals and mixtures of these.

Dwyer writes, “Caw is interested in how privilege and social power can corrupt the transformative capacity of storytelling; how mainstream culture preserves itself by short-circuiting daringness, confrontation, and truthfulness in narrative performance; and how popular myths reinforce social inequality in American culture – especially between white people and people of color.” The goal is not to carve one cohesive story, but to amplify complicated cultural questions on race and sexuality and what it is to inclusively American.

A presence in all of the stories is Uncle Remus, the seemingly benign storyeteller created by Joel Chandler Harris in the late 1800’s. Though not a character in the piece, Uncle Remus is a pivotal figure. Aunt Eloe, the mysterious Queen of Crows, is a primeval goddess who is descending upont the earth to right an ancient wrong and reclaim her own story. Eloe’s army of forgotten spirits, the Auntagonists, assume multiple roles in telling three stories:

Southerner RJ Briarcliff (Eric Thompson) is a contemporary young African American novelist whose popular book for young adults is being adpated into a major animated film for Hollywood. Xanthara (Holly Cate, Equity guest artist) is an aging drag artist who is losing touch with sanity and seeing visions of Aunt Eloe as she prepares for her final performance. Bobby Driscoll (Zachary Chiero) appeared as Walt Disney’s first (child) contract film actor in Song of the South and is now a failing actor who is pulled into a romance of sorts with Michael-Darling (Jeramie Mayes), a gay young black man living in Greenwich Village.

(Not appropriate for children: Adult language and situations.)