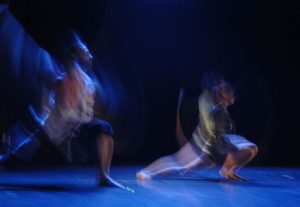 Group Motion, as part of their 40th Anniversary Season, will present Shadow and Light at the Painted Bride on March 13th and 14th.

Featured on the program is LUNGTA, a new work by Artistic Director, Manfred Fischbeck,  COURAGE by Co-Founder Brigitta Herrmann,  and A SHADOW IN THE AEOLIAN PALACE by guest choreographer, Megan Bridge.

The Tibetan Buddhist prayer flag is called the “Windhorse”, or LUNGTA, after the horse which carries the prayers of the faithful upwards towards the heavens. The Lo Monthang region of Nepal is home to a horse culture that is threatened by the encroaching pressures of the outside world. Fischbeck creates a new work in collaboration with composer Andrea Clearfied, Network for New Music and artist Maureen Drdak, inspired by Tibetan symbolism and art. *Saturday matinee includes Network for New Music, performing the music live for LUNGTA.

Brigitta Herrmann presents Courage, to which she says, “Last summer, Mukhtar Mai’s book “In the Name of Honor” came into my hands.  Reading it, I was deeply touched by her story and by the still ongoing, life threatening circumstances of women in tribal areas of Pakistan. This dance was created to bring attention to her story and her courage, and to energize healing for her and all women who suffer from exploitation and injustice.”

A Shadow in the Aeolian Palace, choreographed by Megan Bridge, is joined in the creation of this work by her long-time collaborator, composer and video artist Peter Price. Although the pair have been making dance and multi-media work together in Philadelphia for close to a decade, this season they’ve newly launched their own company <fidget>. Bridge says “Several years ago the pianist Ben Whitten introduced us to the work of painter Tom Bostelle (1925-2005). At that time Bostelle was still living in his “Aeolian Palace” on the Brandywine creek, and his shadow sculptures still populated the grounds outside his studio. Bostelle’s shadow paintings and sculptures have an inherent theatrical quality, despite their insistence on pure unadorned form that lends itself readily to choreographic exploration. And the mise en scene of the artist’s life in this dilapidated old dance hall in Wyeth country was compelling to us.”