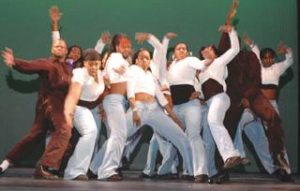 Dance Teams With Urban Edge Compete In Theatrical Shows
By Andrea K. Hammer, For The Bulletin

The Dance Wit Me Network (DWMN), with a title expressing its hip-hop spirit, springs from the motto “Dancing’s not just a hobby; it’s a way of life.”

Originating from a West Chester University event in March 2004, the dance-team competition expanded into DWMN when founder and president Jacob Gray graduated later that year. He said that the demand for repeat performances was widespread.

“Typically, there are two dance teams on a campus,” Mr. Gray explained. “One dances at different sporting events and a spring concert; this one is listed under athletics as the school dance team. Then, there’s another team: Someone will go out for the team, not make it and start their own. A lot of times, those people are from urban areas — African Americans who go out for school dance teams and, unfortunately, don’t make it. So they start their own dance team on campus.”