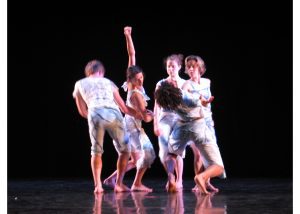 After firmly planting their roots in Philadelphia this past spring, one of the country’s foremost Asian American dance companies performs their first evening length concert in their new hometown. Kun-Yang Lin / Dancers, renowned for its taut integration of Eastern philosophy and contemporary dance forms, takes the Bride stage this February for the world premier of A-U-M, a moving meditation on self-awareness and communal unity that derives from mystical Hindu tradition. The evening will also include the company’s best known pieces “Emptiness of Snow” and “Chi”, plus the Philadelphia premiere of “Shun-Woa,” by award-winning choreographer, dancer and singer, Janis Brenner.

The group’s first full presentation in Philadelphia fittingly embraces the spirit of brotherly love. “AUM” is an ancient and mystical monosyllable in Hindu tradition that represents inner harmony, as well as its interdependent relationship with universal understanding. It is used at the beginning and end of prayers, as a mantra for meditation, and as an invocation itself. “AUM” is a composite of three distinct sounds and concepts: “A” representing Brahma, the God of creation; “U” representing the deity Vishnu, who ensures preservation or balance; and “M” which represents Shiva, who is not only the Goddess of Dance but also the deity of destruction and renewal. Lin describes the piece itself as “an exploration through sacred sound and movement of an awareness of self and the connection of self with the audience and with a wider, universal community.”

In his other works, Lin draws upon various influences from his native Taiwan, such as calligraphy, martial arts, tai chi and traditional Chinese dance movements. These traditions are filtered through his experience working with the icons of contemporary American dance. When Lin left Taiwan for New York in 1994, he quickly rose to prominence under the direction of The Mary Anthony Dance Theater, Martha Graham, Anna Sokolow, and Jennifer Muller/The Works.  In 2002, he set off on his own, starting Kun-Yang Lin / Dancers with the mission to “draw upon its unique Asian American perspective to create work that transcends cultural boundaries and celebrates the ability of dance to integrate body, mind, and spirit. Just 12 months later, Lin accepted a teaching position in the dance department at Temple, but spent the next five years in constant transit on the Chinatown bus, dividing his attention between two cities.

Then, in April of 2007, Lin and his life partner, Managing director Ken Metzner stumbled upon the vacant warehouse space in South Philadelphia that would become the company’s permanent home. “The Chi Movement Arts Center will be a place where the entire Philadelphia community can experience the art of multicultural creative dance expression,” commented Governor Ed Rendell when the facility opened in April of 2008. Rendell went on to praise Kun-Yang Lin / Dancers for, “their dedication to the creation, development, promotion, performance, and teaching of multicultural dance forms.” Having solidified a new base for nurturing dance at 9th and Passyunk, the group travels to one of Philly’s most established homes for the medium to perform the fullest elaboration on their own work the city has seen so far.

Kun-Yang Lin (artistic director) is acknowledged as one of Taiwan’s finest choreographers. He has received numerous awards in Taiwan, including the Taipei National Theater’s Modern Dance Award, National Endowment for the Arts Choreography Award, the Domestic Prize from the Taipei International Community Cultural Foundation and the Taiwan Outstanding Artist Award. At the age of 12, Lin organized the first all-male dance troupe to perform in his native village of Hsin Chu, after having spent the previous 7 years directing his three sisters in numerous performances in their shared bedroom. His early training in calligraphy, painting, figure skating and martial arts came to play a significant role in his development as a performer and choreographer.

Since moving to the United States in 1994, Mr. Lin has been widely recognized including, in 2002, by Lisa Jo Sagolla of Back Stage, who selected Mr. Lin as “the year’s most promising choreographer.” Mr. Lin has performed as a principal dancer with Doris Humphrey Repertory Dance Company and the Mary Anthony Dance Theatre, where he also served as Associate Artistic Director. In addition, Lin has performed in the companies of Martha Graham, Anna Sokolow, Jennifer Muller/The Works, Kevin Wynn Collection, Paula Josa-Jones and Janis Brenner & Dancers. He also has collaborated with musicians such as John Zorn, Ranjit Arapurakal and Animus Music Group on improvisation projects.

Mr. Lin’s choreography has been presented throughout the United States as well as in Asia, Southeast Asia, London, Vienna and Mexico. His work has been performed by the Martha Graham Dance Company in Union Square, Dance Compass, Dance Fusion, Blue Muse Dance, Pick of the Crop Dance, Elizabeth Higgins Dance Theater, Moving Arts Project, Janis Brenner & Dancers, Dance Ensemble of Singapore and Ballet Nacional de Mexico, as well as by various universities and high schools, including Beverly Hills High School. In addition, Mr. Lin’s choreography has been made part of the educational curricula required of dance students at both Taiwan National University of the Arts and Dance Ensemble Singapore (DES) Performing Arts Academy.

Highly sought as a teacher, Mr. Lin has led master classes and workshops throughout the U.S., as well as in Asia, Southeast Asia, Mexico and England. In addition, he has been on the faculty of The Yard, Mary Anthony Dance Studio, H.B. Actor’s Studio, The Limon Institute and Peridance International Dance Center.  Mr. Lin has served as resident Guest Artist at Bryn Mawr College and is currently Associate Professor of Dance at Temple University’s Boyer College of Music & Dance in Philadelphia, where he has taught since 2003.

On the web at: www.kunyanglin.org for more information.

Ticket Information: Ticket prices vary for all Bride events. Many Bride shows sell out; order tickets in advance 24 hours a day at paintedbride.org or Tuesday – Saturday, 12-6pm at 215.925.9914. Bride members receive 50% off of single tickets. Students and seniors with ID receive a 25% discount. The Bride is located at 230 Vine Street in Old City, Philadelphia.

EMPTINESS OF SNOW
In Zen Buddhism, to arrive at a state of mindful “emptiness” is to know a fullness beyond comprehension…Emptiness of Snow was inspired by the December 2004 tsunami — a shocking manifestation of the unpredictable, unseen forces of nature constantly at work in the universe. Through the complex metaphor of winter — the beautiful innocence of snow; the frigid severity of ice; the brutal spontaneity of a glacier’s collapse — the piece explores the relationship of the world that is seen (the ever-changing world of dimensionality) with the world that is unseen (the never-changing world beyond our mind and senses).
Performers: Jumatatu Poe, Scott McPheeters, Jillian Harris, Olive Prince and Jennifer Rose.
Music: Kenneth Kirschner, Tibetan bell Meditation music

SHUN-WOA (Philadelphia premiere)
Originally created in 1994, this updated, extremely dramatic and visually-stunning solo, was revived/premiered on Kun-Yang Lin for the 2007 “25th  Anniversary Celebration” of Janis Brenner at Danspace Project in NYC. Shun-Woa: Loosely translated from Chinese as “vortex” or “eye of the storm”, Shun-Woa is a metaphor for the solo which deals with both the forces of nature and the forces of personal experience/cultural heritage that shape one’s identity. Mr. Lin is costumed inside a huge golden-bronze-colored “skirt” made of 60 yards of fabric that encompasses nearly the entire stage. As he journeys through the four different sections of the dance, the skirt changes into a myriad of images and usages; volcano, Chinese vase painting, fire, storm, cocoon, etc., making the work both visually riveting and emotionally resonant.
Choreographer: Janis Brenner
Performer: Kun-Yang Lin
Music: Ushio Torikai and Tan Dun

A-U-M (World premiere)
“AUM” is an ancient and mystical monosyllable in Hindu tradition. It is used at the beginning and end of prayers, as a mantra for meditation, and as an invocation itself. “AUM” is a composite of three distinct sounds and concepts: “A” representing Brahma, the God of creation; “U” representing the deity Vishnu, who ensures preservation or balance; and “M” which represents Shiva, who is not only the Goddess of Dance but also the deity of destruction and renewal. The piece is a moving meditation, an exploration through sacred sound and movement of an awareness of self and the connection of self with the audience and with a wider, universal community. Meditation involves gazing inward and struggling with the thinking mind, with sentiment and with memory. One must reveal, accept and embrace the totality of ourselves – including our fears, doubts, restlessness, anger and sensual desires – in order to transcend limits and vulnerabilities. Meditation contributes not only to a tranquil state of mind which permits intuitive insights to arise spontaneously, but also to the fostering of a sense of peace and humanity that are needed in our hectic, modern world.
Choreographer: Kun-Yang Lin
Performers: Scott McPheeters, Kimberly Miller, Jennifer Rose, Olive Prince, Elrey Belmonti, Helen Hale
Music: OM chanting